The paper in Nature Sustainability is here: http://go.nature.com/2CxPozy

There is great concern about our potential to feed the planet in the future. Global population is rising and is growing fastest in areas where people are quickly becoming middle class and consuming more energy-intensive food, like animal protein. Finding creative ways to continue to increase food production looks like it will be necessary to feed our future world.

If the past is any lesson, increasing food production can lead to environmental damages. The need to “sustainably intensify” agriculture has received much lip service in the media and academic journals, but has largely remained in the realm of the theoretical. There is a dearth of example cases of substantial yield gains while reversing environmental damages and social inequities. There has thus been growing emphasis on the need to pull other levers in the good system other than increasing production. Some attention has been given to reducing population growth, others have highlighted the need to reduce food waste, while others advocate for the importance of shifting diets. My recent analysis in Nature Sustainability with several colleagues demonstrates that food trade is one of the most important drivers of potential for countries to meet their food needs.

Because of the challenges associated with continually increasing yield—both the expansion of environmental harm and the increasing crop breeding effort required to achieve marginal productivity gains—it is important to highlight other areas of potential influence in the global food system to minimize the amount of productivity gains needed. Our analysis of food—and nutrient—trade shows that at the global level we produce a surplus of nutrients that could meet between 0.07 and 16.79 billion more people’s nutrient needs. Hong Kong, for instance, has enough Vitamin A in its food supply to meet the needs of a population 9 times its size. Malawi, by contrast, only has enough Vitamin A to meet the needs of a country 40% its size.

Our results highlight the potential contribution of equalizing food access to minimizing the need for food production increases. Finding ways to distribute nutrients to areas where they are deficient, as opposed to in excess, would alleviate some of the need to dramatically increase production. Influencing international trade policy, however, can be extremely difficult. Two potential avenues could be through shifting food aid and influencing consumer preferences. Current food aid currently prioritizes staple grains that are rich in nutrients that are sufficient in most countries, but deficient in the micronutrients that are often most needed. Finding ways to build a more holistic approach to food aid is one international food exchange lever that could be potentially influenced. Food trade also strongly shaped by consumer preferences, even in countries with low individual consumer power. In Senegal for instance, individual consumers have low ability to pay relative to higher income countries, but aggregate consumer preference for rice makes Senegal an important importer of rice from rice producing countries. Thus, local-scale efforts to shift consumer preferences could have important implications for trade patterns. This has occurred with growing demand for diets rich in sugar, oil, and meat that have led to a global obesity crisis. As consumers have gotten wealthier, preference for these products has grown. National and local efforts to influence consumption preferences could be successful in restructuring trade patterns to improve nutrient distribution.

But there are many challenges and limitations associated with trade. First the foods that are most easily traded—such as staple grains—are often lowest in composition of micronutrients in which many countries are deficient. Second, there is no guarantee that people with greatest need for imported nutrients will have access; instead, the distribution of food items—and associated nutrients—would depend on ability to pay. Third, increased specialization associated with trade can increase nutrient supply, but could also lead to environmental damage if specialization is focused on environmentally harmful crops, such as large-scale oil palm plantations. Finally, trade can increase nutrient supply but can also make countries vulnerable to sudden changes in global trade patterns.

Our analysis demonstrates the key role that international trade plays in the ability for countries to meet their nutritional needs. Influencing trade patterns for positive change can be challenging. But avoiding harm can be just as important. Protectionist trade policies—enacted most likely for political reasons—could have negative implications for food security. 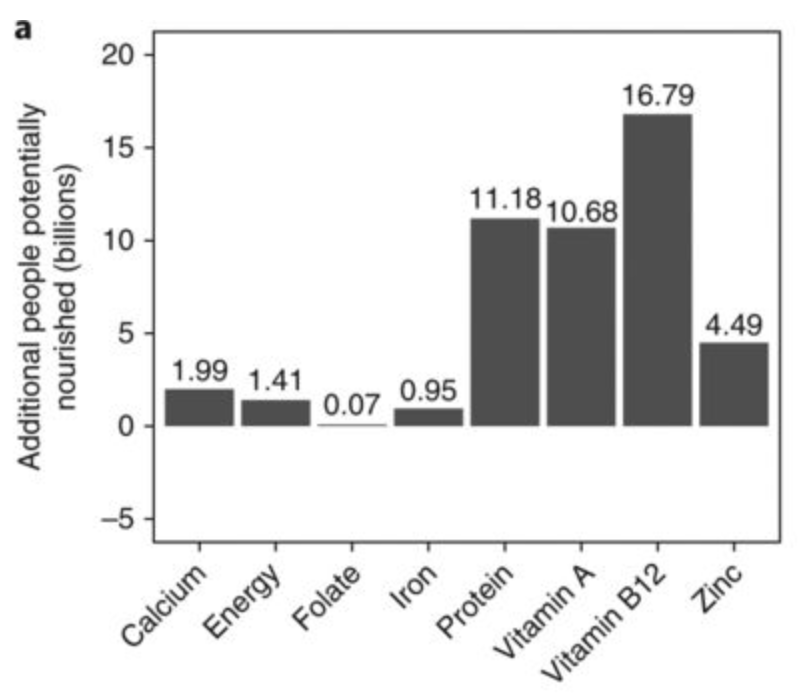