Using the latest and most accurate datasets available for identifying forest change, our study finds that farmers are carving a new agricultural frontier from the highland forests of Mainland Southeast Asia (Myanmar, Thailand, Laos, Vietnam, Cambodia), which has been missed by existing global land use, and forest loss analyses.
Zhenzhong Zeng
Associate Professor, Southern University of Science and Technology
Follow
Like Be the first to like this
0

In 2016, Mr. Banthoon Lamsam (the Chairman & CEO of Kasikornbank, and a Princeton alumnus) told Princeton University that his hometown (Nan Province, Thailand, which was legally designated 85% forest) had experienced high rates of deforestation over the last ten years, and this deforestation was continuing. He funded Princeton University to provide useful analysis that complements other ongoing work related to this subject, and contribute toward a satisfactory solution that protects and restores forests, as well as enhances social welfare in the province. I graduated in that summer. Princeton University (precisely, Prof. Eric F. Wood) kindly hired me for this job. Prof. Wood and I discussed on this project weekly since then.

To begin with this project, I did several road trips in the mountains of Nan Province during that summer. I was strongly astonished by the farmlands on hilly lands (Photo 1). The farmland is completely different to the nearby native forest (Photo 2), which indicates significant loss of carbon, biodiversity, and other ecosystem services. Besides, it is crystal clear that this farmland is not sustainable, because it results in land degradation via soil and water erosion that will dramatically decrease crop yield (e.g., Photo 3).

Photo 1. Farmlands on hilly lands in Nan Province, a province in the highlands of Southeast Asian Massif. The photo was taken in the summer of 2016.

Photo 2. Native forest in Nan Province. The photo was taken in the summer of 2016.

Photo 3. Soil and water erosion due to the farmlands on hilly lands in Nan Province. The photo was taken in the summer of 2016.

First, I realized that the landscape I viewed in that summer is not necessary a result of increasing deforestation over the past decade, because the traditional land use in the region is rotational swidden cultivation and the landscape could be just a dynamic equilibrium. To unveil the history of land use change in the province in the 21st century, we integrated a high resolution forest cover change product for 2001-2016 with a fine-scale land cover map for 2017. We found that total forest loss in Nan Province during 2001-2016 was 66,072 hectares (9.1% of the forest cover in 2000), the deforestation rate was accelerating during the period, and the majority of this lost forest (92%) had been converted into crop (mainly corn) fields by 2017. The result is published in Global Change Biology (DOI: 10.1111/GCB.14366).

I then raised the next two questions in a bigger picture: 1) whether the forest loss driven by agricultural expansion in Nan Province is also occurring in other highlands of Southeast Asia; 2) whether the global land use analyses (e.g., climate model forcing and remote sensing products) have accounted for this pattern. Based on multiple streams of state-of-the-art satellite imagery, we found that cultivated areas have indeed expanded in the highlands of Mainland Southeast Asia. In Maritime Southeast Asia, forest loss was primarily confined to the lowlands, but several small regions of highland forest loss had also been evident. Furthermore, we found that these land cover changes have been left out of climate models used to date by the Intergovernmental Panel on Climate Change (IPCC). Through a variety of mechanisms, the agriculture expansion and forest loss in this tropical region may have profound regional and even global impacts on the Earth System dynamics. By highlighting this omission, our paper may help to rectify this error in time for the IPCC’s 6th Assessment Report, while spurring further research into the climatic impacts of agriculturally driven highland deforestation. In addition, we also evaluated several datasets that allow a moderate-to-high resolution understanding of recent land-cover change, namely several state-of-the-art global satellite-based land-cover products: MCD12Q, ESACCI, and GlobeLand30. Somehow all these global land use datasets have missed this new agricultural frontier.

The next step is to identify the drivers of agricultural expansion in the Southeast Asian Massif, and to examine the impacts of agriculture expansion and forest loss in this region, including its impacts on climate change, carbon emission, loss of biodiversity, water and air pollution, and land-degradation impacts. More importantly, we are now exploring a sustainable solution to the deforestation problem in Nan Province. Our idea is to intensify agriculture via irrigation improvement in some current upland crop fields, and to negotiate with farmers to return other upland crop fields using the benefit from the agricultural intensification. Our target is a win-win outcome, not only forest protection and restoration, but also poverty reduction. We believe all these studies will shed light on developing effective measures to combat upland forest loss in other highland regions. Finally, I sincerely appreciate Mr. Banthoon Lamsam for funding this project (Lamsam-Thailand Sustain Development, B0891). The authors include Zhenzhong Zeng, Lyndon Estes, Alan D. Ziegler, Anping Chen, Timothy Searchinger, Fangyuan Hua, Kaiyu Guan, Attachai Jintrawet, Eric F. Wood. We thank Della Research Computing in Princeton University for providing computing resources. We thank CMIP for providing the IPCC global land-cover change forcing; J. Chen, D.-H. Kim and Hansen/UMD/Google/USGS/NASA for providing the moderate- and high-resolution satellite land-use/cover products; the Planet Lab and Google Earth for providing high-resolution satellite imagery; and the KASIKORN Foundation for data collection in the Nan province, Thailand. Last, I thank all my friends, the farmers, engineers and managers I met in Nan Province for supporting my field works there (e.g. Photos 4-8).

Photo 4. The field work team in Nan Province. The photo was taken in the summer of 2017.

Photo 5. A few farmers I met in Nan Province. The photo was taken in the summer of 2017.

Photo 6. A few engineers I met in Nan Province. The photo was taken in the summer of 2017.

Photo 7. Visiting the Irrigation Project in Nan Province. The photo was taken in the summer of 2017.

Photo 8. Visiting the Muang Chung Sub-district Administration Organization in Nan Province. The photo was taken in the summer of 2017. 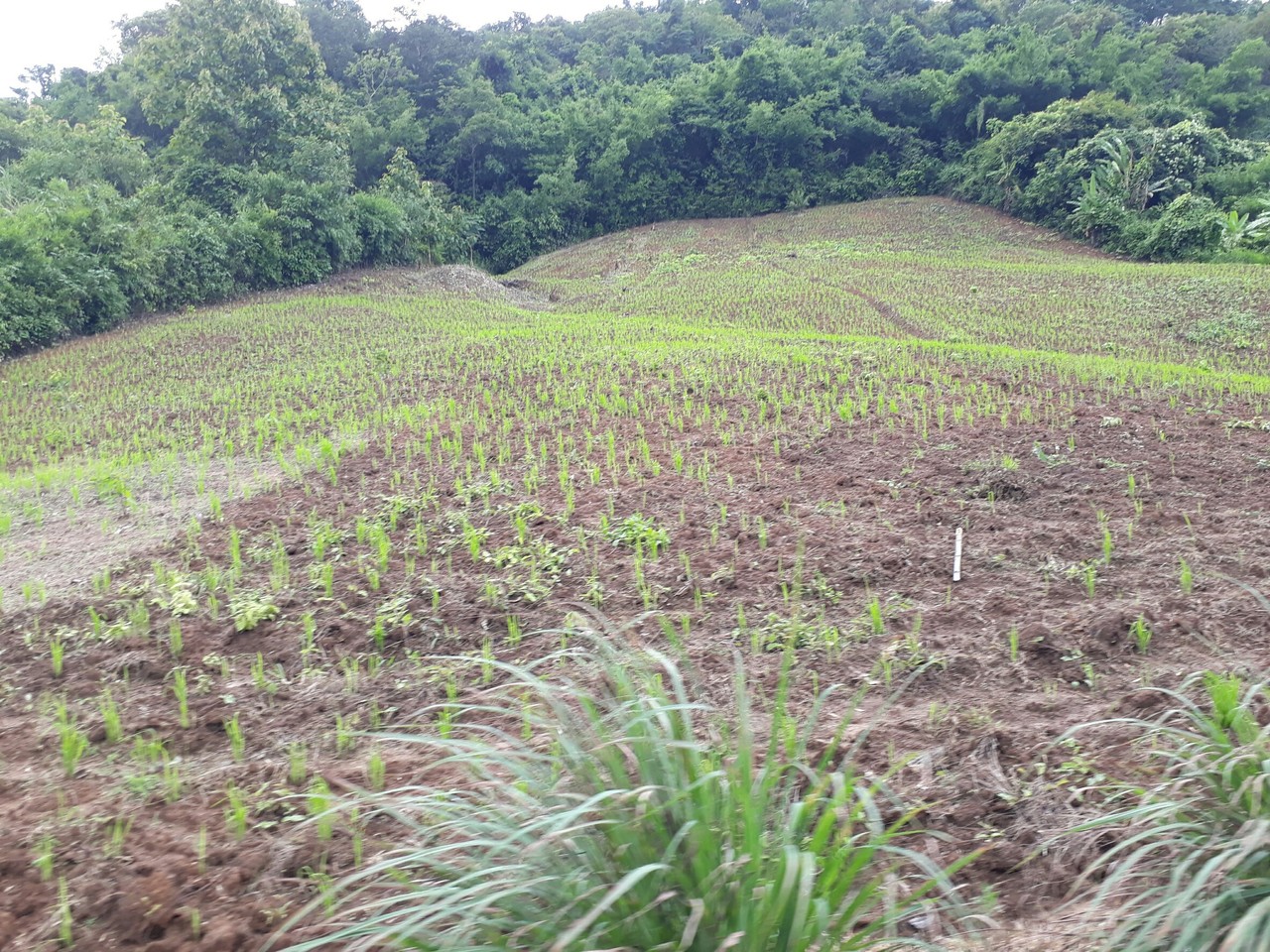 Using the latest and most accurate datasets available for identifying forest change, our study finds that farmers are carving a new agricultural frontier from the highland forests of Mainland Southeast Asia (Myanmar, Thailand, Laos, Vietnam, Cambodia), which has been missed by existing global land use, and forest loss analyses.