With wet biowaste rapidly increasing due to urbanization, industrialization, and a growing population, finding an effective means of repurposing biowaste becomes increasingly crucial. The World Bank has projected a 70% global increase in urban waste and an 83% increase in the treatment cost by 2025, based on the current waste treatment technology such as incineration and landfilling. Consequently, a paradigm-shift to consider biowaste as a resource rather than a waste is key for a sustainable future.

Our paper published in Nature Sustainability (Nov. 13, 2018) discusses how to convert and upgrade wet biowaste into transportation fuels that can be used readily in the current transportation infrastructure. We demonstrated that hydrothermal liquefaction (HTL), a process mimicking how mother earth produces petroleum, integrated with distillation and esterification is an energy-efficient approach to realize the potential of wet biowaste for alleviating petroleum consumption and reducing greenhouse gas emissions.

In summer 2013, our team worked on converting wet biowaste, such as swine manure, food processing waste, and mixed-culture algae, from wastewater into biocrude oil via HTL (See Chen et al., 2014a and 2014b). Knowing that HTL can efficiently convert wet biowaste into biocrude oil with heating values that are 75 to 90% of the petroleum heating value, we thought it was vital to answer questions such as “Is it possible to use the biocrude oil converted from wet biowaste as renewable transportation fuels?”  In our opinion, a critical step for biocrude commercialization is the production of biofuels complying with the current standards so that conventional infrastructures can be used.

To achieve this goal, we identified two major research gaps that needed to be bridged. First, we needed to develop a robust method to upgrade biocrude oil converted from different kinds of wet biowaste. Notably, the properties of HTL biocrude oil vary significantly from the sources of biowaste. Second, we needed to understand more about the current fuel standards for engine emissions. After surveying the literature, the principal investigator (Yuanhui Zhang) and the first author (Wan-Ting (Grace) Chen) decided to reach out to Dr. Brajendra K. Sharma, an expert in the bio-oil upgradation and fuel specification area, and Prof. Chia-Fon Lee, an expert in the fuel combustion and engine technology area. After several meetings, we realized that there was one more research gap—we needed to develop a pilot-scale reactor that can produce enough amounts of biocrude oil with consistent properties for upgrading, fuel specification, and engine tests.

At that time, the development of pilot-scale reactors for HTL of biomass had just started (See more about our development history of HTL reactors via this link). Limited by the quantity of biocrude oil that can be produced by a lab-scale HTL reactor, using catalysts and reducing gas to upgrade biocrude oil were extensively studied. After more progress in developing pilot-scale HTL reactors, our group finally had the capacity to explore other upgrading methods (such as distillation) that could potentially separate the distillable fractions for fuel from the non-distillable fractions in the biocrude oil, which is crucial.

In particular, the biocrude oil converted from fecal materials (for example, swine manure used in our paper) has a high viscosity that could deactivate catalysts quickly. In our paper, we showed that distillation can separate up to 75% of biocrude oil that could possibly be used as a renewable diesel blendstock.

Before our paper was published, fuel specification analyses and engine tests of HTL biocrude oil were limited because of many reasons, such as oxygen and nitrogen contents, fuel stability, and the distillation properties and costs of upgrading HTL biocrude oil. In this paper, we identified that the high acidity, which may corrode pipe lines and engines, was an important issue that must be addressed before conducting engine tests. Furthermore, we showed that distillation plus esterification has a higher energy recovery ratio and lower greenhouse gas emissions than conventional upgrading methods such as hydrotreating that uses hydrogen gas to remove oxygen and nitrogen contents in fuels.

In summer 2016, we finally conducted engine tests with upgraded HTL distillates after spending three years developing pilot-scale reactors, separating the biocrude oil via distillation, and upgrading the distillates to meet fuel specification standards. In our paper, engine tests performed using 10–20% upgraded distillates blended with diesel show a 96–100% power output and similar pollutant emissions, as compared with regular diesel. Interestingly, we found that a slightly higher oxygen content (0.2 wt%) of HTL distillates would help diesel to combust more completely. This finding is very different from what we originally assumed: the existence of oxygen contents is negative for biocrude oil properties because it reduced the energy contents of it.

Through a combined distillation and esterification approach we can produce renewable transportation fuel from wet biowaste and eliminate a bottleneck in HTL biocrude commercialization. The results from this study provide an alternative approach to biowaste-to-energy valorization and bridge the research gap for co-optimizing biofuels and engine technologies. Ultimately, we hope results from our research work can improve sustainability and help achieve the U.N. Sustainable Development Goals. 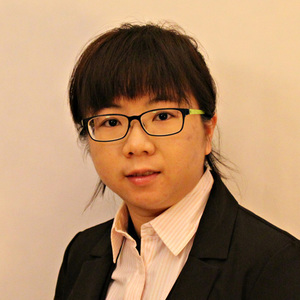 Prior to joining the faculty at Lowell, Wan-Ting (Grace) Chen is a postdoc research associate in the School of Chemical Engineering at Purdue University. Grace received her B.Sc in Chemical Engineering from the National Taiwan University, M.S. and Ph.D. in Biological and Agricultural Engineering from the University of Illinois. Grace’s PhD research work focused on developing a synergistically integrated waste-to-fuel system that simultaneously produces biofuel and treats wet biowaste via algae growth and hydrothermal liquefaction (HTL). In particularly, Grace’s PhD work contributes to the area of upgrading complex HTL biocrude oil converted from biowaste into transportation fuels by distillation, esterification, and catalytic treatments. Grace’s ongoing work focuses on valorization of plastic waste into useful products, including pristine polymers, fuels, specialty chemicals, and monomers.
Follow