Reducing agriculture’s impacts while increasing outputs is challenging. This study, of an Indian smallholder system, shows that microsatellite data can detect yield gains from a low-cost fertilizer intervention.

Food security will be increasingly challenged over the coming decades, due in part to growing populations, changing diets, and climate change. One way to increase yields is by closing yield gaps in regions that are low yielding. With this goal, researchers, NGOs, and practitioners have been implementing on-farm interventions that increase yields for decades, yet it often remains unclear how effective these interventions are and whether there are ways to make these interventions more effective. This is because it is difficult to collect the on-the-ground data needed for impact evaluation, such as field-level measures of yield.

When I was in India in 2015, I began to realize how difficult it was to conduct impact evaluation at scale. I traveled around the state of Bihar with the international organization CIMMYT as they collected crop cut measures of yield, which is the gold standard for estimating field-level yields. To conduct crop cuts, we traveled with farmers to their fields, harvested the crop, and then removed the grain and weighed it in field. This was both time consuming (it took almost 45 minutes per farm) and hard to do at large scales (farmers harvested their crops at the same time, making it difficult to visit many fields at once).

This experience made me wonder if we could measure yields in a more scalable way that required less ground data. I knew one potential way would be to use satellite data, but I found that traditional satellites were too coarse in spatial resolution (30 m – 250 m) to map the yields of individual smallholder farms (< 0.03 ha). In collaboration with David Lobell at Stanford University, who was my postdoctoral advisor at the time, I began to think of ways that new, high-resolution (< 5 m) micro-satellite data could be used to estimate yields. We partnered with the company Planet to test whether their micro-satellite data could be used to estimate smallholder yields.

We found that micro-satellite data could accurately map field-level wheat yields in smallholder farms across Bihar. More importantly, we found that these satellite data could measure the impact of a sustainable intensification intervention that we implemented in over 100 farmer fields in collaboration with CIMMYT. We found that our intervention (a new fertilizer spreader) resulted in yield gains of 5% without any increase in inputs. We also found that we could use satellite data to identify which fields improved the most from the technology, and showed that if we targeted those fields using satellite data, we could double yield gains to 10%. This work was published this week in Nature Sustainability.

Our work highlights how new technologies, such as micro-satellite data, can help increase food production sustainably. By using satellite data, we were able to measure the impact of agricultural interventions at large spatial and temporal scales without needing to collect a large amount of labor and cost intensive ground data. We were also able to target our intervention to the fields that would benefit the most, doubling yield gains for the same intervention cost and effort. This work highlights how satellite data can be used to sustainably increase food production at scale, which could prove to be a key tool to enhance food security over the coming decades. 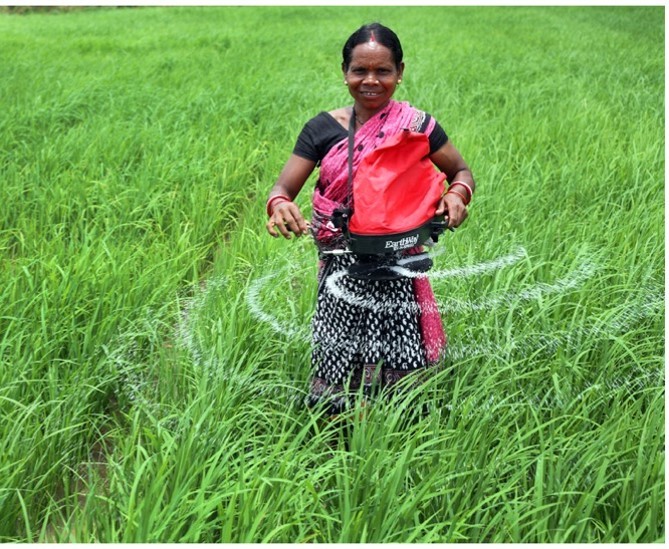