Our convoluted path to learning about the water transport pathways induced by a new channel molecule led to the discovery of a new mechanism that could be exploited for efficient desalination membranes.
Manish Kumar
Associate Professor, University of Texas at Austin
Follow
Like Liked by santhana krishna kumar alagarsamy
0

Water transport in cell membranes has been invoked as an ideal model to be emulated for developing high performance and sustainable water treatment membranes. The central molecules responsible for water transport across cellular membranes are water channel proteins, Aquaporins. These proteins transport water at exceptionally high rates of around a billion water molecules per second while generally excluding all solutes. They transport water in the form of a “water wire” - a single file of water molecules spanning the length of the protein channel [1]. There has been an increasing number of studies on incorporating aquaporins into artificial membranes to impart their exceptional properties to synthetic membranes, collectively known as biomimetic membranes.

In response to concerns regarding the possible lack of stability of proteins in engineered systems, the field of Artificial Water Channels (AWCs) has emerged. AWCs are synthetic architectures that attempt to mimic the structure, and more importantly, the function of biological water channels. Our group published work on a unimolecular channel called the peptide-appended pillar[5]arene (PAP[5]) in 2015 which came close in water transport rates to aquaporins (within one order of magnitude) but had a ~5 Angstrom central pore that did not reject ions [2].

This is where the journey to the current paper [3] started. Our simple (and what turned out to be ultimately naïve) assumption was that, if a slightly smaller selective pore than that of PAP[5] could be developed into a tubular channel, it may lead to rejection of salt ions (Na+ and Cl-). Collaborator Jun-Li Hou (Fudan University), the original inventor of PAP[5} channels [4],  had synthetized a variant of this channel termed peptide-appended hybrid[4] arene (PAH[4]) that had a pore width approaching ~4 Angstroms. Upon testing, our initial assumption seemed to be validated with a high qualitative rejection of ions and surprisingly high permeability comparable to that of classical aquaporin, AQP1. Our naïve assumptions, however, seemed to crumble completely when we attempted to explain the molecular mechanism of transport by molecular dynamics (MD) simulations.  We found that water did not like to enter the central pore of these channels! Further in individual channels, sometime the water escaped from the open side “windows” of the channel and made its way between the lipid molecules and the channel wall, but at a low rate and not as a continuous water wire.

We observed, in MD simulations, the tendency of PAH[4]s to aggregate within the membranes. This property turned out to be the key to the high permeability and selectivity of PAH[4]s. To our surprise, these channels were working cooperatively and in the aggregated channels there seemed to interconnected water wires that passed through various parts of the channels without penetrating through the central pore. These water wires were numerous, continuous and dendritic in nature, and, seemed to increase in number with increasing aggregate size. We propose that this could lead to the number of water wires exceeding the number of channels! We believe that this is the first example of true cooperative AWC activity which is, to our knowledge, not observed in biological membrane systems. We estimate that desalination membranes made using PAH[4] channels could have a 3-4 order of magnitude higher salt to water selectivity than current desalination membranes while also having a higher permeability. The new mechanism described here can inspire a new class of membranes that may lead to highly efficient membranes for desalination, breathable fabrics, and membranes for gas and vapor separations.

Leveraging the small to make a big impact in agriculture 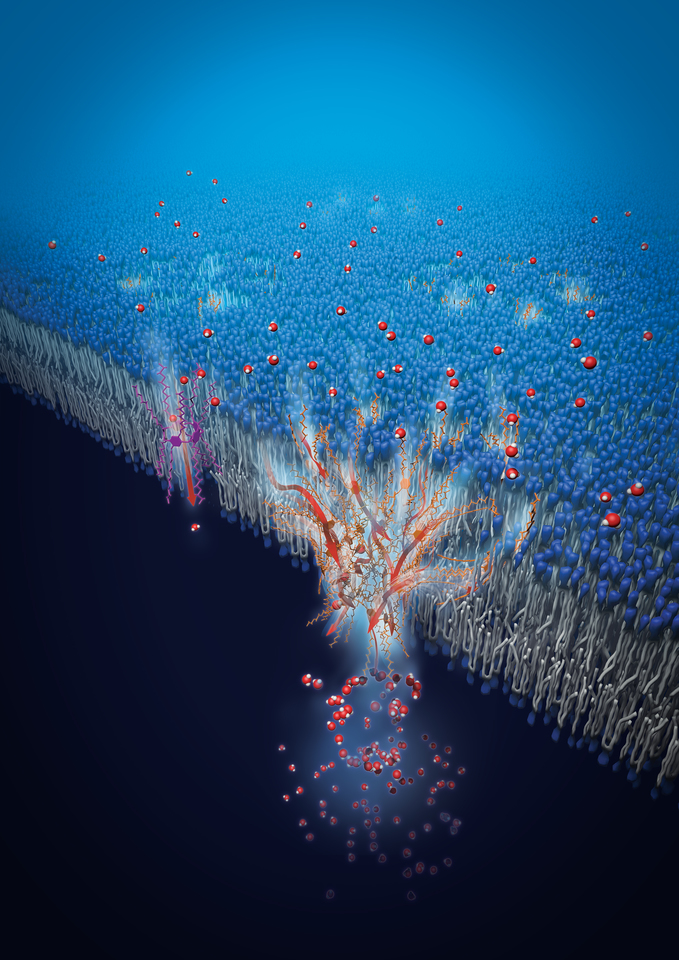 Our convoluted path to learning about the water transport pathways induced by a new channel molecule led to the discovery of a new mechanism that could be exploited for efficient desalination membranes.