Our demand for sand is driving increased rates of extraction from the world’s rivers. Our recent work on the Mekong River shows that it only takes 2m of river bed lowering as a result of sand mining to make river banks unstable and collapse, placing river bank communities at substantial risk.
Chris Hackney
Research Fellow, University of Hull
Follow
Like Be the first to like this
0

Urbanization and economic development fuel demand for sand, used for concrete. This study finds that sediment loads are insufficient to replace the sand mined from the Mekong River delta, with mining rates high enough to make river banks unstable.

It’s everywhere you look. Hidden in plain sight, yet it provides the foundations on which modern society functions. Around the globe the humble grain of sand is big business; it is the most extracted natural resource on the planet (with the exception of water), yet the process of removing sediment from rivers has major implications for the stability of river channels, riverine ecology and it has long been suspected of driving increased incidences in river bank collapse. This issue is acute along the banks of the Mekong River in Cambodia and Vietnam where, since 2013, a team of researchers led by the University of Southampton and including colleagues from the Universities of Hull, Exeter and Illinois, have been studying the dynamics of sediment movement through the Mekong River and its delta.

It doesn’t take long when travelling on the Mekong to realise just how extensive the human impact of sand mining really is. All around Phnom Penh, Cambodia, the river is strewn with suction dredger platforms and dredging vessels pumping up sand from the river bed. However, the true impact of these activities only became visible after we undertook new sonar surveys of the river bed. We found hundreds of pock-marks – many meters in diameter and up to six meters deep - all across the river bed, highlighting just how much sand was being removed. This is a subaqueous scene that is common place across the Mekong River and its delta (Jordan et al., 2019).

To really understand just how sand mining is impacting the Mekong River, we need to know just how much sand the river provides every year, naturally. As part of our project, we surveyed locations along a ~250 km length of river, using a range of small survey boats and a larger vessel that we equipped as our floating field laboratory. We collected samples of suspended sediment and used new acoustic techniques to quantify how much sand was being transported in suspension within the water column (see Darby et al., 2016). But perhaps the even more tricky bit - given the river is fast flowing (up to 4 metres per second) and often > 20 m deep - was working out how much sand is moving along the bed of the river. To get that information, we used state-of-the-art multi-beam echo sounder sensors – which consist of a swath of 512 acoustic beams that scan the river bed - to capture the morphology of the river bed at a centimetric resolution. These repeat surveys enabled us to track the movement of sand dunes and calculate how much sand was being shifted along the bed.

By comparing these estimates of the amount of sand being transported naturally by the Mekong River (around 6 million tonnes per year) with our estimates of the rate at which sand is being removed, our startling, indeed alarming, conclusion was that humans are removing annually around five to nine times the natural rate of sand supply. Given this huge deficit, it is no wonder that local communities are blaming increases in bank collapse, and the concomitant loss of houses and infrastructure, on local sand mining operations. By measuring and modelling the stability of the river banks along the Mekong River, we also showed that sand mining operations can readily make river banks unstable by dredging as little as two meters into the river bed - the mining pits we saw in our sonar images can be up to eight meters deep.

Some solace comes in our finding that vegetation helps stabilise the river banks. If river banks are vegetated, and thus often adopt a lower bank angle, our work suggests that the banks are much more resilient to mining-induced river bed lowering: along vegetated banks, the river bed can be lowered by up to six meters before the banks become unstable. However, what our work does make clear is that to move towards a more sustainable extraction practice, sand mining must be managed to minimise the impacts on river banks, and the communities that inhabit them. This demands monitoring of natural sediment flux, as well as extraction rates, as well as a suite of allied actions (Bendixen et al., 2019) in order to move towards sustainability.

Our paper ‘River bank instability from unsustainable sand mining in the lower Mekong River’ has just been published in Nature Sustainability. 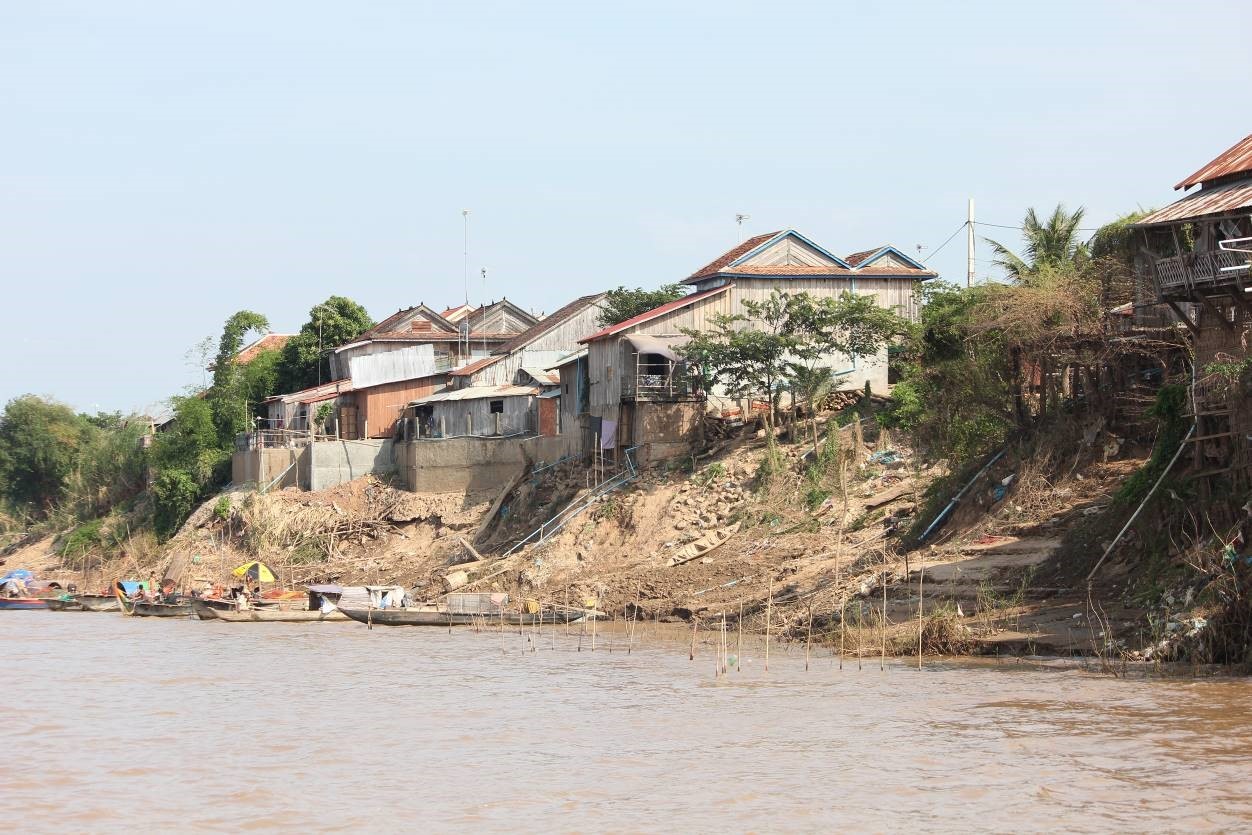 Our demand for sand is driving increased rates of extraction from the world’s rivers. Our recent work on the Mekong River shows that it only takes 2m of river bed lowering as a result of sand mining to make river banks unstable and collapse, placing river bank communities at substantial risk.