Plastic pollution has rapidly become one of the more widespread problems in global marine ecosystems, and millions of tons now enter our oceans annually. To track and remove plastics from our oceans before they cause harm, there is an urgency to understand and map their distributions and pathways.
Lauren Biermann
Marine Remote Sensing Scientist, Plymouth Marine Laboratory
Follow
Like Liked by Alex Thompson and 4 others
0

In theory, optical satellites have substantial potential from which to identify and track plastic litter in the marine environment. Up until this point, however, no studies had successfully managed to use satellite imagery for this purpose. In our recent paper, we demonstrate two new developments. First, we show that it is possible to detect aggregated patches of macroplastics floating in coastal waters using optical data acquired by the European Space Agency (ESA) Sentinel-2 satellites. Second, using a Naïve Bayes classification approach, we show that floating plastics are distinguishable from seaweed and other naturally occurring materials.

Several things had to happen to make this work possible. First, we needed relatively high-resolution, multispectral optical data to be collected over coastal waters. This requirement was fulfilled by the Sentinel-2 Earth observation mission, which is operated by the European Space Agency (ESA) under the Copernicus Programme. While primarily a terrestrial mission, the Multi-Spectral Instruments (MSI) aboard the Sentinel-2A and 2B satellites also acquire imagery over coastal waters at 10 m spatial resolution every few days. Secondly, we required an algorithm tuned for highlighting objects floating on the ocean surface. To this end, we developed the Floating Debris Index (FDI) for the Sentinel-2 MSI. Essentially, this algorithm works by leveraging the difference between the NIR, and the baseline reflectance of NIR, and it has proved efficient at detecting floating objects on subpixel scales.

Third, we needed floating plastic targets in order to train our algorithms. This was where collaboration proved key! The Remote Sensing Group at the University of the Aegean were in the process of deploying various plastic targets during their Plastic Litter Projects just as this study was starting, and they were happy to share information on target sizes, composition and placements. Thanks to their help, we were able to know exactly what Sentinel-2 was ‘seeing’ using the FDI, and this, in turn, meant we were able to start building a spectral signature for floating plastics. We supplemented these known plastic detections with validated plastics that we detected after severe flooding in Durban, South Africa. Here, vast amounts of floating bottles and other plastic debris had been washed into the harbour and along the coastline after torrential rainfall and flooding (Figure 1). Finally, we generated spectral signatures of natural materials that are likely to be mixed with macroplastics in the marine environment, including driftwood, seaweed, pumice, and sea foam.

With these building blocks in place, we could start searching for macroplastics ‘in the wild’. Based on published studies collecting in situ plastics data in coastal waters, and even on posts on social media, we detected aggregations in two developed countries – Scotland (Figure 2) and Canada – and two developing countries – Ghana and Vietnam.

In all cases, floating aggregations were detectable using our FDI on subpixel scales, and macroplastics were often mixed with natural materials like seaweed or foam. We manually selected pixels that we suspected to be dominated by plastics using spectral signature and the FDI, as well as a normalized difference vegetation index (NDVI). Using an automated approach, we then differentiated floating materials using a Naïve Bayes (Bayesian) machine learning approach. This is a probabilistic classification algorithm, which computes the probability of a detected pixel belonging to the classes it has been trained with (in this case: known plastics, seawater, driftwood, seaweed and sea foam), and assigns it to the one with the highest probability. Across our four case studies, suspected plastics were successfully classified as plastics with an overall accuracy of 86%.

This has been a technically challenging problem, which was interesting to try to solve. However, does this new information actually help to address the problem of marine plastics? Truthfully, this study is only a first step from which we aim to build and develop more useful or operational approaches. Perhaps the most valuable part of this work is that we detected plastics floating in waters of Developed Countries. Despite always leading with these examples in talks or interviews, I repeatedly see how audiences revert to their baseline assumption that marine plastic pollution is a problem caused by the ‘developing world’. What we perhaps need to be reminded of is that North America and Europe (including the UK) are the world’s largest sources of plastic waste and, for years, developed countries have been shipping their discarded plastics to China and Southeast Asia. The most recent numbers I could find suggest that America recycles only 8% of the plastic it produces and consumes (EPA, 2017). What is going to happen now that China and SE Asian countries are banning such imports?

At Plymouth Marine Laboratory, we’re continuing to develop new, meaningful ways of detecting plastics that will help to address the existing problem, but I hope this scientific paper also serves to remind us that the problem is global. A meaningful way of preventing plastics from becoming a marine problem is to address the source (petrochemical companies, oil and gas industries, drinks and packaging manufacturers) and curtail endless production. Let’s continue to work together to ensure marine plastic pollution does not become another environmental problem that we didn’t fix, simply because we were too distracted by blaming others, or lulled into false comfort by our shiny recycling bins.

Special thanks to Dr Matt Carter (@MattIDCarter), Post-Doctoral Research Fellow at the St. Andrews University Scottish Oceans Institute, for allowing us to use his photo of the seal pup as our poster image. He took this picture on Inchkeith off the east coast of Scotland in November 2018, in the same vicinity we detected floating plastics in satellite data acquired in April 2018 (Figure 2). 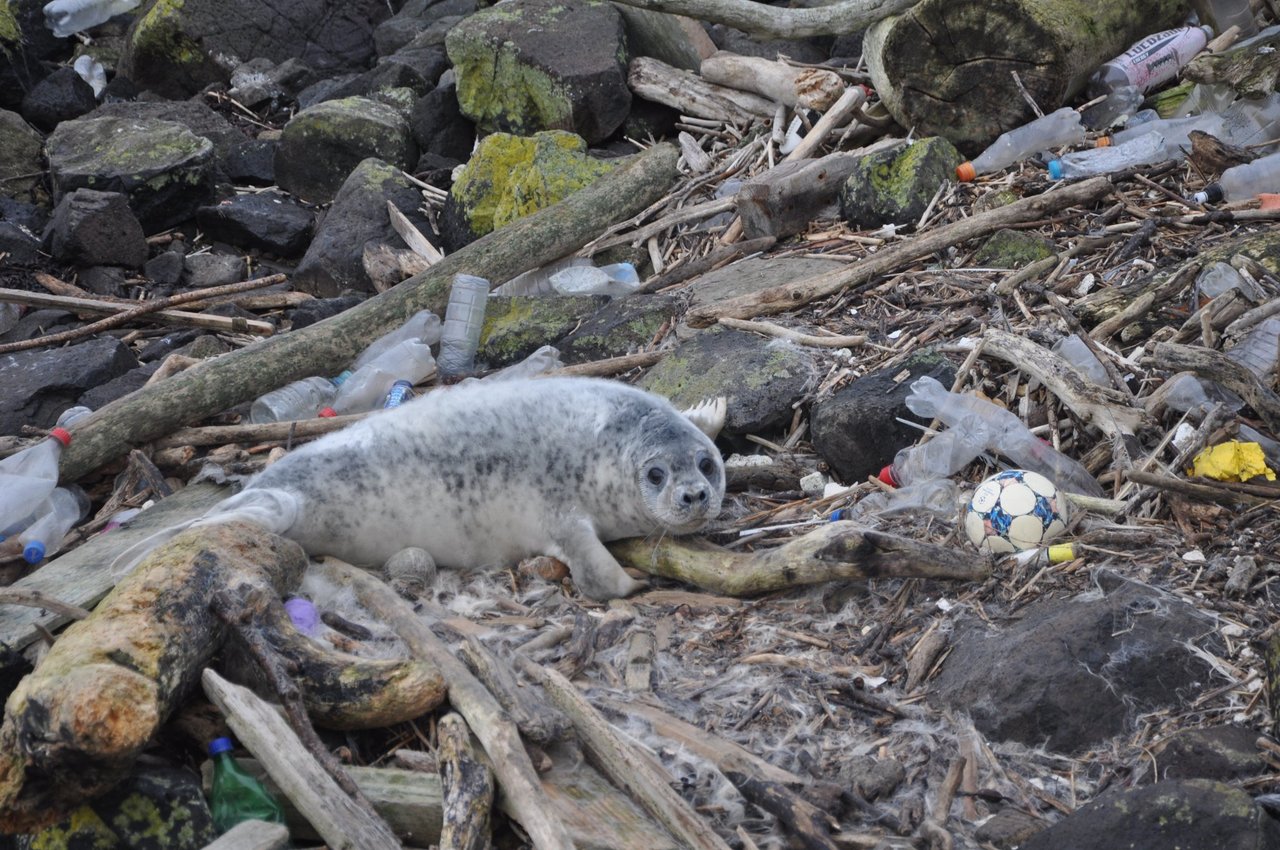 Plastic pollution has rapidly become one of the more widespread problems in global marine ecosystems, and millions of tons now enter our oceans annually. To track and remove plastics from our oceans before they cause harm, there is an urgency to understand and map their distributions and pathways.