Renewables are considered a key tool for making progress towards the United Nations Sustainable Development Goal 7, which implies universal access to affordable, reliable, and modern energy. Renewable energies can also help to reduce global emissions and hence mitigate climate change. Decentralized renewable energy projects, based on solar photovoltaic (PV) systems, have also the potential to contribute to climate change adaptation, climate resilience, energy security, and social justice. However, renewables have an Achilles claw: the intermittency. The sensitivity of renewables to future weather variability can boost intermittency, which may complicate energy planning and compromise investments in the energy sector.

Although photovoltaic (PV) power capacity is expected to dominate growth in the renewable capacity in the foreseeable future, PV power outputs change with climate; for example, changes in the frequency of warm cloudy conditions can substantially alter PV energy yields. PV energy yields depend on the solar irradiance, which is in turn modulated by aerosols and by clouds. PV outputs are also affected by air temperature, with cooler conditions generally improving PV cell performance and hotter conditions reducing it, and by surface wind speed because air flow typically cools the PV module. All these parameters (clouds, aerosols, temperature, and wind) are changing with climate. 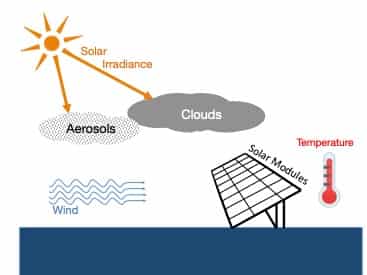 The key role of warm and cloudy weather

Cloud patterns are changing and in some regions, these changes are enhancing the weather variability. Prior efforts have addressed the influence of a changing climate on future PV power outputs, finding that climate change is expected to lead to relatively modest changes in average PV energy yields. However, these prior efforts have generally not accounted for the influence of the enhanced weather variability (associated with future climate in vast parts of the world) on PV power outputs.

Although our results confirm that average PV energy yields are expected to change to only a minor to moderate extend, they highlight the fact that these relatively modest changes mask significant shifts in the number of warm cloudy days (i.e. days with relatively low PV power outputs). In our new study, we have shown that significant increases in the frequency of warm cloudy conditions are expected in large regions of the world by mid-century. Increases in the number of cloudy days may boost the weather variability and in turn the PV power intermittency. 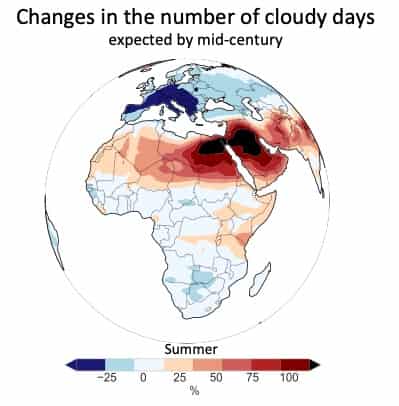 Changes in cloud patterns can either enhance or mitigate the PV power intermittency. The latter is the case of southern Europe, where we have shown that attributable to a decrease in clouds and aerosols, summer days with conditions unfavorable for PV generation are expected to drop by half by midcentury, even under a moderate-emission scenario.

The situation is different for some low latitude regions, where more frequent unfavorable conditions for PV generation (cloudy and overcast conditions) can be reinforced by increasingly extreme temperatures. This is case of the Arabian Peninsula and in northeastern Africa where, due to the more frequent concurrence of high temperatures and clouds, summer days with unfavorable conditions for PV generation are expected to double by midcentury, under a moderate-emission scenario. 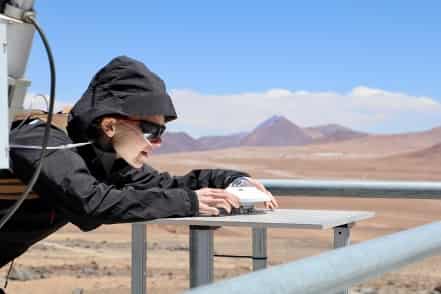 A sustainable energy transition requires reliable planning to compensate for potential changes in climate regimes throughout the entire lifespan of the PV systems. However, the enhanced weather variability associated to the future climate is generally omitted from current estimates of PV power outputs. This omission may compromise the economic sustainability of PV projects; increases in the number of days with “very low” PV power outputs may boost PV power intermittency, making it harder to maintain the production/consumption balance within an electrical grid. In particular, significant increases in the number of consecutive cloudy days could affect production costs (because of the need for enhanced energy storages for providing backup power as well as grid stabilization services during these longer events).

Understanding the response of the PV power outputs to changing climate regimes is crucial for an energy transition and in turn for sustainable development. Hence, our results present valuable information for energy planners to compensate for the effects of future weather variability. We firmly believe that most of the challenges posed by the enhanced weather variability can be overcome by technical improvements and proper planning. 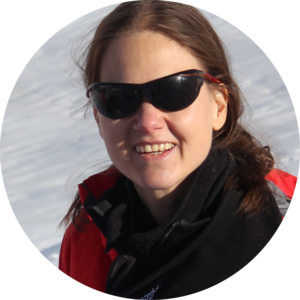 Pedro M Sousa
Springer Nature Sustainability Community
We use cookies to help improve your experience. By continuing to browse our website you are consenting to our use of cookies.
Learn more