Take-away packaging of food and beverages dominates global litter in aquatic ecosystems. Nearshore environments emerge as key areas to intercept litter before it breaks down into microplastic and spreads across the global ocean. Items from ocean activities contribute, at least, 22% of the litter.

+1
Carmen Morales Caselles and 1 other View all
Research Fellow, University of Cadiz
Follow 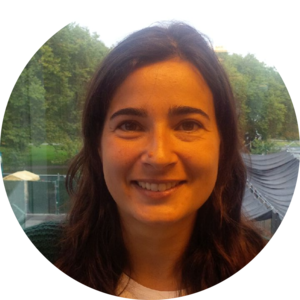 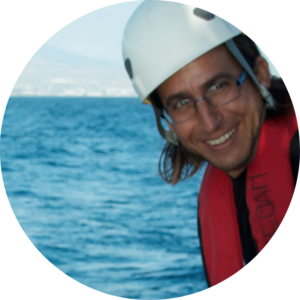 In just a few decades, our natural world has profoundly changed, echoing the unprecedented acceleration of human economic activity. We have inherited a degenerative economic system that extracts Earth’s resources to make more and more goods, which are often used for only a short period of time before being thrown away as trash into overflowing landfills and aquatic ecosystems. So far, this system has proven incapable of managing the growing amount of waste, and the results are unfortunately all too familiar: terrestrial and especially aquatic ecosystems are drowning in litter all over the world.

When we started working on this study, our idea was a simple one: to create a ranking of the top items littering the ocean. We felt this ranking could contribute to the worldwide debate on waste prevention policies by identifying evidence-based priority items through a comprehensive diagnosis of the nature and origin of the huge quantities of waste accumulating in the global ocean.

Soon enough we realized that this was not such a simple task. On the one hand, we were grateful for the support from researchers and initiatives collecting litter data worldwide, and we also obtained a fair amount from the growing literature. However, all the information that we managed to gather included data collected by different techniques, different classification systems, and different criteria. We were trying to compare apples and oranges.

So, we started developing an in-depth harmonization process to connect and compare more than 30 databases that collectively held more than 12 million observations of litter in aquatic ecosystems. Once the data harmonization was complete, the results confirmed the disproportionate share of plastics as well as the prevalence of take-away consumption items in all ecosystems (except in the open ocean where objects related to maritime activities were predominant). We found that at least 22% of the marine litter originates from sea-based activities, whereas 78% comes from land.

Our findings showed the top 10 macrolitter items (i.e. larger than 2.5 cm) that are polluting aquatic environments are plastic bags and bottles, food containers and cutlery, wrappers, ropes, fishing-related items, lids, industrial packaging, glass bottles and drink cans. 8 out of these top 10 litter items are made of plastic. This was somehow expected. Still, it was shocking to find out that bags, bottles, food containers and cutlery together with wrappers account for almost half of the human-made objects found in the global ocean.

With all this information, we started portraying the distribution of debris across seven different aquatic environments to depict what we called a “subway map” with different colorful transit lines that varies for each of the objects and link aquatic ecosystems as metro stations (see below). This map turned out to be a conceptual model of the most-likely predominant flows of the top litter items in the ocean. 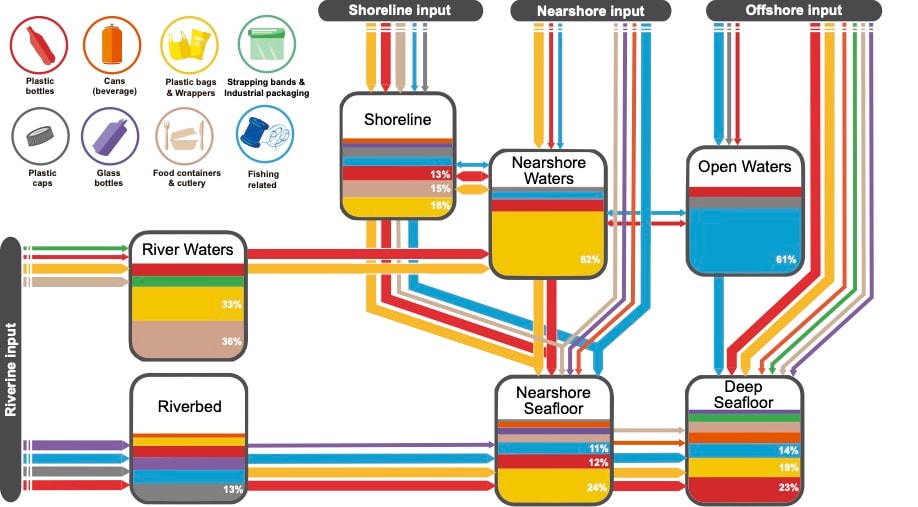 The model shows different distributions of items across aquatic environments, and even more, it revealed an inshore-offshore sorting system of marine litter. In short, land-sourced large objects, such as bags or wrappers, tend to accumulate in coastal environments, with less probability of reaching the open sea. The results suggest that a large proportion of the debris that reaches the sea from land tends to accumulate on the nearshore seabed – these ecosystems act as a major sink for large-sized litter. We learned that coastal areas act as a temporary reservoir for small plastic fragments before they travel to the open sea. In this way, we believe that shores represent an opportunity to intercept macro-litter before it gets broken down and released into the global ocean as virtually unmanageable microplastics.

For us, the next steps are to enhance the comparability of global litter databases and to mobilize the power of citizen science in order to support marine litter research and decision-making. Despite new polices targeting certain items, we believe that management actions should prioritize these top litter items to prevent further impacts in aquatic ecosystems. But far more structural changes are needed. As a civilization, it’s time to rethink the degenerative economies we have inherited that are filling up the Earth’s ecosystems with our short-use products, and long-lasting waste.

Hello, I am a Research Scientist at the University of Cadiz working on understanding the inputs, distribution and fate of micro and macroplastics in the Global Ocean. I have a Master's in water and coastal management and a doctorate specialized in marine pollution and ecotoxicology. I spent several years in Paris and Uruguay working as a consultant at UNESCO's Intergovernmental Oceanographic Commission, where I was closely involved in the coordination of an Integrated Coastal Area Management project on indicators in Latin America and other UN initiatives. Afterwards, I spent several years in Canada, where I worked implementing the PollutionTracker Project, a monitoring program in the West Coast of Canada to assess the presence of contaminants in sediment and their effects on marine organisms. My plan is to keep working towards bridging science and management for an effective protection of the marine environment.