Erosion of the Arctic coast could double in pace by 2100 as a result of climate change, releasing organic carbon that has been frozen in the permafrost for millennia. However, uncertainties in future coastal erosion estimates, and in their impacts on the Arctic climate still remain.
David Marcolino Nielsen, Patrick Pieper & Armineh Barkhordarian
3 contributors
Like Liked by Evelina Satkevic and 2 others
0

Coastal erosion in the Arctic is caused by permafrost thaw and wave abrasion enhanced by sea ice melt, both of which will increase under climate change. Projections of erosion rate across the Arctic indicate that mean erosion rates will rise beyond historical precedent over the twenty-first century…

The fragile Arctic coast in a changing climate

The Arctic coast consists of permafrost – perennially frozen ground – very rich in organic carbon and ground ice. During winter, coastal permafrost is well protected, surrounded by sea ice and below-0°C air temperatures, keeping it all frozen and stable. During summer, positive temperatures melt sea ice and thaw the upper permafrost layers, destabilizing and exposing coastal cliffs to the action of warm ocean waters and waves. The combined effect of thawing permafrost and ocean-waves erodes the Arctic coastline, which retreats about 0.5 meters per year on average. At some locations, tens of meters of land are eroded into the Arctic Ocean every year. Muostakh island erodes at up to 20 meters per year, for example. At Muostakh, ground is basically composed of ice and unconsolidated sediment, making it extremely vulnerable to erosion during warm weather conditions and storms (Figure 1).

Coastal erosion rates have recently increased throughout the Arctic.  Locally, erosion rates have more than doubled within the last decades, as a result of climate change. Arctic surface air temperatures have risen four times faster than the global average,  warming up the underlying permafrost.   Sea-ice melt has prolonged the open-water season, leaving coastal areas exposed to waves for longer periods every year.As greenhouse-gas emissions continue to rise, we expect erosion rates to continue to increase as well. However, until recently, the magnitude and timing of the future increase in Arctic coastal erosion, as well as its sensitivity to climate change, were unknown.

In our recent work published in Nature Climate Change, we made the first estimates of future coastal erosion rates and the associated organic carbon loss from permafrost at the pan-Arctic scale in a wide range of future scenarios for the 21st century. We project the Arctic-mean erosion rate to very likely exceed its historical range of variability before 2100, even in the low-emission SSP1-2.6 scenario, in which society globally cooperates for a transition towards renewable energy sources. However, in SSP1-2.6, erosion rates stabilize at around 2050, while in other scenarios it continues to steadily increase. Arctic coastal erosion rates could double or triple by 2100 in comparison to historical values (1850-1900) in the intermediate and high-emission scenarios SSP2-4.5 and SSP5-8.5, respectively. For each degree of increase in global-mean surface air temperature, coastal erosion would release between 2.3 (SSP2-4.5) and 4.2 (SSP1-2.6) Tg (or million tons) of organic carbon from permafrost every year. Sensitivity of erosion to global warming is larger in low-emission scenarios, which follows the effect of the Arctic warming amplification.

Although the yearly amounts of carbon removed from permafrost by coastal erosion are on the order of 1000 times smaller than human carbon emissions, coastal erosion impacts should not be neglected. Not only does erosion threaten coastal communities and infrastructure, but it also plays an important role in the Arctic carbon cycle. The magnitude and time scale of coastal erosion impacts will ultimately depend on the fate of the eroded material within the coastal environment.

The fate of the eroded carbon

The degradation of organic matter from thawing permafrost releases greenhouse gases to the atmosphere, feeding back to further warming. In the specific case of Arctic coastal erosion, however, the eroded material may take several different pathways, which substantially differ from each other in terms of greenhouse gas emission effects.

Once eroded from the coastal permafrost, organic matter degradation releases CO2 at different time scales.  Direct emissions to the atmosphere occur from thaw slumps, still onshore, where the transport into the ocean is relatively slow. Frozen blocks of permafrost also abruptly collapse from steep coastal bluffs into the ocean, where organic matter also degrades releasing CO2. In the ocean, nearshore currents and waves maintain the organic matter in suspension in the water column, allowing for effective degradation. However, the eroded material may also sink and stay buried in the marine sediment, where remineralization happens much slower, at millennial time scales, having little to no immediate impact on atmospheric greenhouse gas concentrations. The fraction of the eroded material that is trapped in the sediment also varies largely between locations, depending on the extent and effectiveness of the nearshore resuspension zone.

In addition to the already uncertain fate of the eroded carbon at present-climate conditions, climate change adds yet other unknowns to the problem. The Arctic will likely be totally free of sea ice during summer starting in the middle of the 21st century. A smaller sea-ice cover potentially increases primary production by allowing more incoming sunlight, and increases the oceanic CO2 capture by uncovering the cold Arctic surface waters. However, nutrient-availability may still impose a limit for productivity in the Arctic Ocean, although we do project the nutrient input from coastal erosion to increase in the future. At the same time, warmer and fresher Arctic waters may reduce their CO2 uptake capacity. A fine balance between these processes and scales will determine the net effect of coastal erosion on future Arctic air-sea CO2 fluxes, and on its role in the Arctic carbon cycle.

A neglected component of the Arctic carbon cycle

The future role of permafrost as a carbon reservoir is very uncertain, and strongly depends on the emission scenario we follow. Modelling studies have shown that it is possible that the permafrost region will actually accumulate carbon in the future, working as a net carbon sink, if society follows low and intermediate-emission scenarios SSP1/RCP2.6 and SSP2/RCP4.5, respectively (Figure 2). The explanation is that a slight increase in surface temperatures, together with CO2 fertilization, could allow for longer and more productive seasons for vegetation growth, capturing atmospheric carbon in high latitudes. This Arctic greening would only be less efficient to counteract carbon emissions from the degrading permafrost in high-emission scenarios (SSP5/RCP8.5), in which the permafrost region would become a net carbon source.

Arctic coastal erosion, however, is a relatively certain – and relevant – component of the Arctic carbon cycle. Although coastal erosion always contributes to permafrost-carbon loss, in all scenarios, it is usually neglected in permafrost-carbon feedback calculations. Accumulating our yearly estimates from 1850 until 2100, coastal erosion would remove about 2.0 trillion tonnes of carbon (1.3 to 2.5 uncertainty range) from permafrost, which accounts for between 17% and 26% of the net changes projected by Kleinen and Brovkin (2018) with JSBACH model simulations (Figure 2). These estimates are very uncertain for many reasons, including simplifications in the representation of permafrost, and Arctic coastal erosion itself.

In addition to the scenario uncertainty, model uncertainty also plays an important role. On the one hand, different models substantially diverge from each other at estimating the future net change in the permafrost-carbon stock, for example. On the other hand, individual models also have associated inherent uncertainties, depending on design choices, assumptions and simplifications. In our specific case, the largest fraction of uncertainties in our erosion projections stems from the semi-empirical estimates of our coastal erosion model parameters. In our work, we do not resolve the fine-scale processes of Arctic coastal erosion itself (e.g. the mechanics of falling and rotating frozen blocks of permafrost, or the thermodynamics of thawing permafrost and melting ground ice) or the surrounding environment (e.g. land-fast and small-scale features in sea ice, and varying permafrost ground-ice content). It is still impractical to run such detailed models at the pan-Arctic scale for climate-change scenarios. Instead, we parameterize Arctic coastal erosion as a function of its main large-scale drivers, compatible with the scales of state-of-the-art Earth system model simulations. Given our semi-empirical approach, more observations would help decrease model uncertainties.

We highlight the need for further work to constrain uncertainties in Arctic coastal erosion projections and impacts from two fronts: 1) at expanding the monitoring network of Arctic coastal observations, and 2) at improving the representation of fine-scale coastal processes in Earth system model simulations.

Read more in our article:

Telling the tale of rising seas and Africa’s Heritage Sites 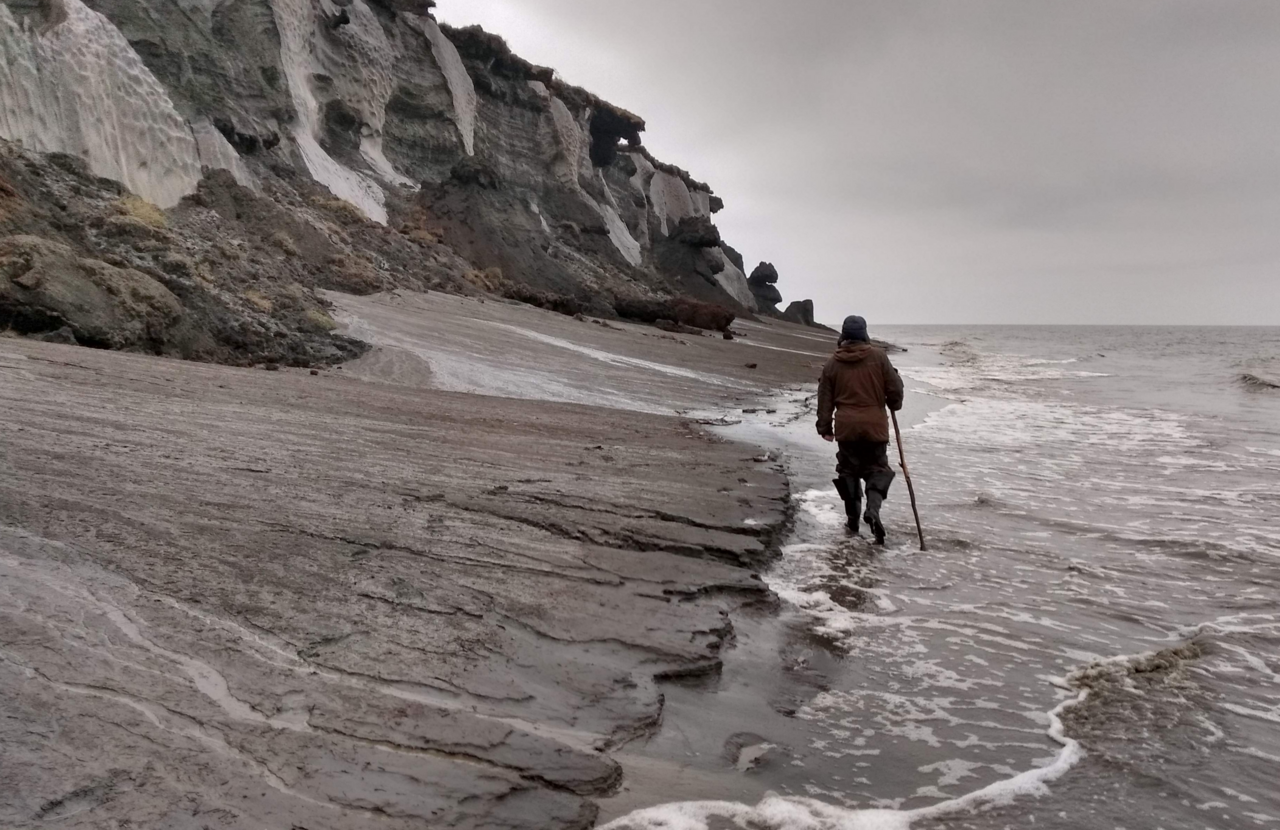 Erosion of the Arctic coast could double in pace by 2100 as a result of climate change, releasing organic carbon that has been frozen in the permafrost for millennia. However, uncertainties in future coastal erosion estimates, and in their impacts on the Arctic climate still remain.