Water is re-emerging as an important coolant. There are 12,900 trillion liters of water constantly stored in Earth’s atmosphere. The atmospheric water sorption–evaporation cycle is demonstrated a low-carbon and effective cooling strategy for PV and beyond.

“Climate change is moving faster than we are,” warned UN Secretary-General Antonio Guterres. Indeed, we are not on track to achieve the UN’s Framework Convention on Climate Change (‘the Paris Agreement’) goal to limit global average temperature within 1.5°C above pre-industrial levels. Achieving this goal would require anthropogenic CO2 emissions to be cut by 45% by 2030 and by 100% (namely, net zero) by 2050. A very possible warming of 2°C above pre-industrial levels is expected to lead to irreversible losses of the world’s most fragile ecosystems and to mounting extreme-weather-induced crises, including deadly droughts, heatwaves, floods, fires, hurricanes, and tornados.

In pursuit of low-carbon energy sources, we have turned to natural gas and nuclear power. Because these types of energy are nonrenewable, they can be considered only as transitional solutions. Among the big three renewables of hydropower, solar energy, and wind power, solar energy is the source of the other two and has the highest natural abundance and the lowest geographical limitation. As such, solar energy must sit at the center of the global fight against climate change.

The European Union’s (EU) photovoltaics (PV) status report forecast that global PV installation capacity will increase to 1500 GW by 2025 and more than 3000 GW by 2030. Given this fast-growing capacity, PV will most likely surpass hydropower energy production by 2024 and will by then help solar energy claim its rightful position at the top of the renewables pyramid.

The fast rise of solar PV is timely and encouraging as the life-cycle carbon footprint of PV of 3.5-12g CO2 equivalent/kWh is among the lowest of all power-generation methods, including nuclear power with a carbon footprint of 40g CO2 equivalent/kWh. What is more, PV has a low barrier of entry and its unit price continues to go down. These advantages make PV a viable and attractive option especially for off-grid and point-of-consumption electricity generation as well as a cost-effective shortcut to achieving the UN’s seventh Sustainable Development Goal of affordable, reliable, sustainable and modern energy to all by 2030.

PV panels, however, suffer from an over-heating problem during daytime, particularly in arid and semi-arid regions where solar irradiation is high. In summer, PV panels in these areas can be 40 oC hotter than the ambient air. Such high temperatures degrade the energy conversion of the system, with a reported 0.4-0.5% energy efficiency loss for each degree of temperature rise. In addition, these high temperatures reduce the lifetime of the panels. Until now, PV cooling has remained a conventional problem; its solution is now urgent with the fast growth of PV installation capacity.

Water, among all room-temperature liquids, has the highest latent heat of vaporization (i.e., 2.3 kJ/g). Moreover, water evaporation can remove heat from a surface faster than passive heat dissipates into the air, theoretically making it an effective and clean coolant. However, in practice, no easy method exists to deliver consistent supplies of fresh water to cool PV panels.

In the first prototype we built, we stuck a hydrogel-based AWH sorbent directly onto the backside of a PV panel. Once there, its daily cycle of water vapor sorption during the night and PV-heat-driven water evaporation during the day led to effective PV cooling. The prototype device provided an average cooling power of 295 W m-2 and lowered the PV temperature by at least 10 °C under 1.0 kW m–2 solar irradiation under laboratory conditions. It delivered a 13-19% increase in electricity generation from a commercial PV panel in outdoor field tests conducted in both winter and summer in Saudi Arabia. We were thrilled that the first prototype we had engineered successfully proved our concept.

As our manuscript on PV panel cooling by the atmospheric water cycle was being reviewed and then revised for publication in Nature Sustainability, three papers on AWH-assisted cooling for different applications were published in other journals (Advanced Materials, Joule, Science Robotics). When combined broadly with the increasing popularity of indirect evaporative cooling and adsorption cooling, this recent surge in work on water-based cooling serves as a convincing testament that water is re-emerging as an important coolant in the context of the ever-worsening global warming threat.

Whereas it is true that widely used commercial coolants made from hydrofluorocarbons (HFCs), a replacement for the notorious chlorofluorocarbons (CFCs), have little ozone depletion potential, they are themselves very potent greenhouse gases, with an average global warming potential (GWP) of 4582 over 20 years and 2362 over 100 years. For comparison, the GWP of CO2 is set to 1. The appalling GWP of commercial coolants has not attracted the attention that it gravely deserves. Simply put, they are not as clean as we once thought.

Of course, water has many of its own drawbacks as a coolant and its application seems for now still limited. However, as long as water can be used as a low-carbon coolant as much as possible, we are certainly one step closer to achieving the UN’s sustainable development goals. Given our free and unrestricted access to the moisture in the air, AWH-assisted cooling is uniquely poised to provide clean and sustainable cooling when access to large sources of water is limited. I am cautiously optimistic that the pathway exists for environmentally friendly use of atmospheric-water-based cooling.

Acknowledgement: Peng Wang thanks Virginia Unkefer for her help editing the post and Carolyn Unck, Carmen Denman, and Renyuan Li for their help with the images. 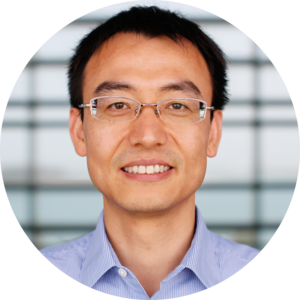 Dr. Peng Wang, Ph.D., is a faculty member at King Abdullah University of Science and Technology (KAUST) at Saudi Arabia and The Hong Kong Polytechnic University. He was a founding faculty member of KAUST. Dr. Wang is very passionate at global sustainability and strives to develop solutions contributing to water-energy-climate nexus. His current research focuses on renewable energy driven clean water production and wastewater treatment, zero-liquid-discharge desalination and industrial brine treatment, atmospheric water harvesting and its applications to smart cooling and energy conversion, resource recovery from wastewaters, brine, and seawater by electrochemical and membrane processes. Dr. Wang serves as an associate editor of Environmental Science & Technology, an academic journal published by American Chemical Society (ACS). He obtained his Ph.D. from Bren School of Environmental Science and Management at University of California, Santa Barbara (UCSB) in 2008.
Follow