Highlighting urban studies and its transformational impact on urban research and pratice.
Alexandrine Cheronet
Publishing Director , Springer Nature
Follow
Like Be the first to like this
0

Cities worldwide are attracting more and more people and, as a result, urban studies is a rapidly growing and increasingly urgent field. Ambio has had a role in promoting insights broadly relevant for urban sustainability and resilience - and bringing them to policy and practice - by publishing and thus making visible some of the scientific discoveries that now provide part of the foundation for transformational urban research and practice.

Behind the Paper: Cities and the Biosphere

What is a sustainable city? Ever dependent on their surroundings this is never a question of only the cities themselves. However, back in the mid-1990s, the supporting land area of cities, their ghost acreage or hinterland, was largely out of sight and thereby out of mind. Inspired by earlier work on human appropriation of the products of photosynthesis, we started to work on the paper ‘Ecosystem Appropriation by Cities’ (Folke et al. 1997). Our goal was to place cities as part of their broader global biosphere context and investigate the extent to which cities actually were dependent upon the life-supporting ecosystems and the environmental functions and ecosystem services those generate.

We focused on the thirty largest cities in the Baltic Sea drainage basin and performed an analysis of the, at that time, world’s megacities and how much of the work of the oceans they appropriated for seafood consumption and of the world’s forests for carbon sequestration. The work with and results of this paper have been very useful in the years since its publication, to illustrate and clarify, in lectures, seminars, for practice, policy and business, that irrespective of preferences for nature or whether or not people in cities appreciate the broader biosphere, they still fundamentally depend on nature’s contributions for wellbeing.

Today, the urban-biosphere interplay is increasingly visible, perhaps particularly in the food realm where the production of huge quantities of bulk food in vast vulnerable monocultures is put into perspective. As a contrast, high quality food as part of biocultural landscapes and carrier of multiple social and ecological values is increasingly appreciated and a much richer interpretation of cities within the biosphere than studies of urban metabolism alone

However, in the current Anthropocene and an increasingly unpredictable future, biosphere support can no longer be taken for granted. Currently, with climate change, pandemics and social and economic turbulence, this interdependence of people and nature stands out profound as well as fragile. Humans, our actions, institutions, and governance systems, will have to foster active stewardship of our own future on planet Earth. With the majority of us now living in cities, this has become and urban issue. Thus, sustainable urbanisation is central to overall sustainable futures. And as we indicated already in 1997, it will require joint strategies and incentives between city dwellers and the stewards of the landscapes and seascapes upon which city life depends.

All articles in Ambio's 50th Anniversary Collection on Urbanization:

Andersson, E. 2021. Reconnecting cities to the Biosphere: Stewardship of green infrastructure and urban ecosystem services: Where did it come from and what happened next? 50th Anniversary Collection: Urbanization. Ambio. Volume 50 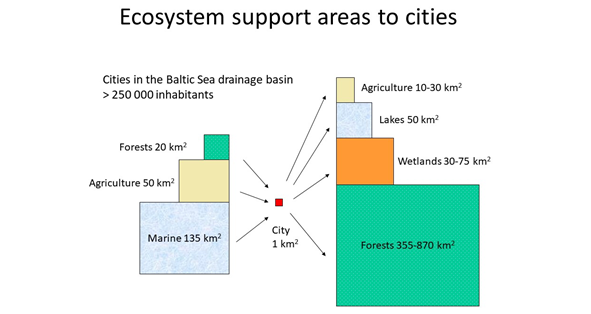 Highlighting urban studies and its transformational impact on urban research and pratice.