Since the 21st century, urban heat island effect has been widely concerned by many scholars. We comprehensively analyzed the day and night difference of urban heat island intensity and its influencing mechanism from the perspectives of sea-land breezes and local climate zones.
Jun Yang
Professor, Northeastern University China
Follow
Like Liked by Evelina Satkevic and 2 others
0

In the process of global rapid urbanization, the population has surged, and the urban impervious surface area has increased, followed by the frequent occurrence of urban heat island (UHI) effect, extreme climate, high temperature and heat waves, which seriously affect human comfort and threaten human health. The UHI effect refers to a phenomenon that the urban temperature is higher than the rural temperature, which has received extensive attention from Chinese and foreign scholars in recent years. However, in the research on the influencing factors of UHI, most of them are based on the role of a single factor such as land use type, climate, urban ventilation, etc., but there is a lack of research that combines multiple factors to explore the mechanism of UHI. Therefore, a comprehensive study of multiple influencing factors is necessary.

When discussing the effects of local climate zones (LCZ) and sea-land winds on UHI, we found that the day and night UHI intensity (UHII) corresponding to the LCZs of the building type is larger than that of the natural type LCZs. Meanwhile, based on the sea-land wind speed calculated from the meteorological stations data, the correlation between day and night UHII and the sea-land wind speed was discussed. The results showed that the sea wind could weaken the UHI effect, and the land wind could enhance the UHI effect.

SID-LCZ indicates the station number and the type of LCZ to which it belongs, DIS stands for the distance between the station and the coastline, SWS and LWS represent wind speed of sea and land respectively, DUHII and NUHII respectively represent the intensity of day and night heat island.

In summary, both LCZ and sea-land winds will have an impact on UHI, and the influencing factors on UHI need to be studied comprehensively. Through a combination of various factors, the mechanism of action of UHI is discussed, in order to provide reference for urban planning and rational layout.

Jun Yang is a Professor of Urban Climate and Human Settlements Lab‘s at Northeastern University (Shenyang China). Dr. Yang has been involved in interdisciplinary study in the areas of geospatial technologies, urban remote sensing, urban space growth simulation, urban climate zone, human settlements and Sustainability. As PI or Co-PI, Dr. Yang has been involved in 50 research projects receiving a total of ~RMB 15 millions from EGOV.CN (e.g. NFC, MOST and MOE) since 2002. He has authored and co-authored more than 180 papers and book chapters. Published papers in academic journals: more than 70 English papers and more than 110 Chinese papers. 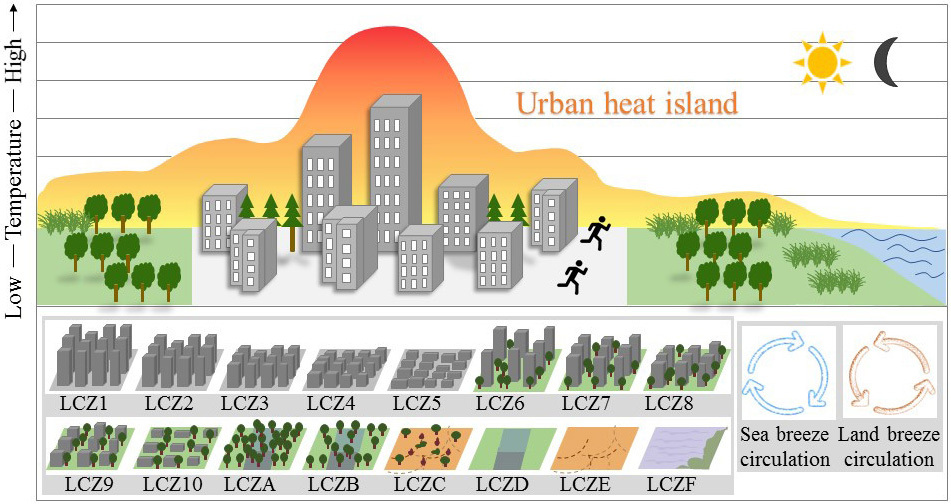 Since the 21st century, urban heat island effect has been widely concerned by many scholars. We comprehensively analyzed the day and night difference of urban heat island intensity and its influencing mechanism from the perspectives of sea-land breezes and local climate zones.