The transfer of public funds between governments within a country based on ecological indicators is an emerging tool in environmental policy. A review of extant and proposed schemes identifies challenges and opportunities to expand the use of this instrument.

Conserving natural ecosystems benefits people all over the world. But the costs of ecosystem conservation are concentrated locally. When national parks are declared or forests are protected, for example, local governments have less land available for agriculture, and a constricted tax base. A rapidly growing conservation finance mechanism called ecological fiscal transfers (EFT) aims to solve this problem by transferring public funds from governments that benefit from conservation to the local governments where conservation takes place.

Researchers have been studying EFT for decades, with the most studied being Brazil’s. And yet judging by the literature reviews of published papers, few researchers seemed aware of the full global scope and scale of EFT. When one of us (Busch) first started researching India’s US$6-11 billion per year transfers to states based on forest cover in 2015, he hadn’t yet come across the term EFT. Hardly any of the dozens of English-language papers on EFT make reference to China’s massive decade-old EFT, despite a robust Chinese-language academic literature on this topic.

In September 2020 we convened a virtual workshop to undertake a comprehensive and current review of EFT programs worldwide. Some EFT we knew well; others we discovered only as we prepared for the workshop. All in all, we found existing, emerging, or proposed EFT in around 15 countries.

In our workshop we also sought to synthesize the published literature about EFT. Several cross-cutting themes emerged from looking at the literature in full. Why have EFT emerged? How should they be designed? What effects have they had?

We had a third goal as well—to bring together disparate researchers to form a community of practice. We ended up convening 23 researchers from 15 countries. A silver lining of the global pandemic was that we were all able to gather virtually to share our research findings and synthesize our understanding.

EFT have had a variety of effects, according to researchers. In Brazil and Portugal, local governments have set up more protected areas. In China, EFT have contributed to a drop in pollution, but not an increase in conserved land. India’s EFT haven’t yet led to an increase in forest cover, but they have become an official part of financing the national climate commitment.

One of our most striking findings was how large EFT are globally and how fast they are growing. In 2007 EFT amounted to just US$300 million a year; by 2020 this had grown to US$23 billion a year.

We expect the growth in EFT to continue. Just since 2019, France has had a seven-fold expansion in the number of municipalities eligible for its EFT; an 18th Brazilian state initiated EFT, and India increased the size of its EFT by one-third. In the weeks after our paper was accepted we’ve learned of interest in EFT in at least two more countries.

A big part of the attraction of EFT is that they offer a way for governments to put sizeable amounts of money towards environmental goals without having to raise tax revenue or ask legislatures to approve new funding from scarce resource pools. Instead governments need only reformulate how existing flows of funds are transferred between governments.

This is especially timely in 2021. Governments are formulating pledges to international processes such as United Nations Framework Convention on Climate Change, Convention on Biological Diversity, and UN Decade for Nature. At the same time, public budgets around the world are stretched even thinner than usual by Covid. National governments currently transfer almost US$5 trillion per year to state and local governments, so greening even a small fraction of these transfers could result in sizeable increases in ecological funding.

Now that we’ve completed the first comprehensive global review of EFT, we will continue to track and analyze ongoing developments. Perhaps in several years we can follow up with another workshop and an updated global review. 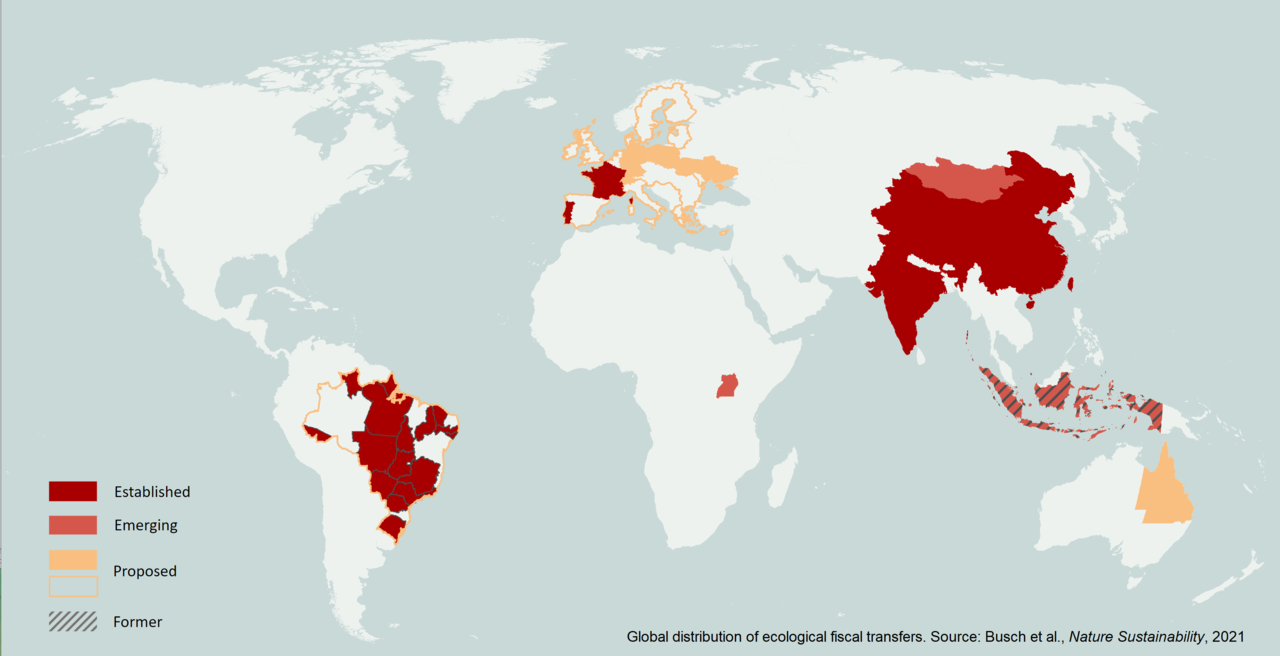