They're on your jackets, your cookware, and your hamburger wrappers, but they're also in your blood and can be found in the remotest places on Earth. Why can't someone make an environmentally friendly replacement for toxic perfluoro-carbons? Challenge accepted.
Kevin Golovin
Professor, University of British Columbia
Follow
Like

Perfluorochemicals render fabrics water and oil repellent; however, their use poses environmental and health risks. Here, the authors show the rational design of textile finishes with excellent oil repellency without adopting any perfluorinated substances.

The first question I am always asked is, “why do fabrics need to repel oil?” At first glance, it’s a fair point. People aren’t swimming in pools of oil. I generally don’t end my day with a glass of canola. And I am thankful it doesn’t rain diesel from the sky. But to understand oil repellency you need to look within. And by that I mean your sweat and bodily secretions contain oily components. And unfortunately, when a fabric gets wet by an oil it loses its water-repellent features.

Enter perfluoro-carbons (PFCs), long chain molecules where the outer-facing atoms are fluorines only. PFCs are unique in their ability to minimally interact with other compounds, be it liquid, foods (think frying pans), or organisms. On the one hand, this makes PFCs excellent candidates for fabric finishes, as they offer the best-possible repellency against both water and oils [1]. Unfortunately, PFCs are also toxic due to their extreme persistence in the environment and within the body. The very same inertness that makes them so attractive for liquid repellents also means they take forever to break down. I’m talking hundreds of years. This means their concentration continually increases in the environment and then, through drinking water, in our blood. For every litre of blood, the average human body contains 4 nanograms of perfluorooctanoic acid, one of the toxic by-products of PFC production and degradation [2]. Did you consent to that?

Without diving into the politics of perfluoro-carbons, suffice it to say that there was and still is significant financial motivation to continue using PFCs even after their toxicity was well documented [3]. Since at least 1976, but likely before, certain PFCs were found in the bodies of production workers whose health detriments were clear. When did countries begin phasing out PFCs to protect their citizens? The majority around 2016 [4], but they are still widely used today.

Back in 2015 I was nearing the end of my doctoral degree which gave me the opportunity to look back at what I’d done to earn a PhD, but also ahead towards the kind of academic I wanted to become. Most of my work to-date had focused on developing extremely repellent coatings, typically utilizing PFCs. Did I really want to be known for this long-term? At the same time, due to the impending PFC ban, outdoor apparel giant Patagonia announced a national Eco Innovation Case Competition, essentially hoping to mine the fresh minds of business students with a simple question: long-chain PFCs will be banned in 2016, what should Patagonia as a company do about it? Shortly after the announcement I was contacted by an MBA student at the University of Michigan’s Ross School of Business, asking if I knew anything about repellent coatings. I did.

Fast-forward to 2019, skipping over our first-place win at the competition, surfing (read: not drowning) with Patagonia’s upper management, and re-locating to British Columbia, Canada, as an Assistant Professor in one of the most beautiful parts of the world. BC is home to two of apparel’s most recognizable brands: Arc’teryx and lululemon, and I ensured that we were introduced to one another right away. I asked one of my postdocs at the time, Dr. Ambreen Nisar, to write a review of oil-repellent fabrics so we could convey to these industry giants why PFCs were necessary to repel oil. Along the way, it became clear that the construction of the fabric, i.e. the specific weave, twist, denier, etc., was as important as the coating when it came to repellency calculations. But what also became clear was that, though better, PFCs were not unique in their ability to repel oil. It wasn’t a binary scale: materials like waxes and silicones should also be able to repel oil, just not as well as the perfluoro-carbons. Interesting.

After meeting with Arc’teryx they decided to put their money where their mouth was and funded a three-year project investigating non-PFC oil repellency. This Behind the Paper is a testament to their excellent decision-making, if I do say so myself. I hired Ms. Sadaf Shabanian, an incoming PhD student at the time, to prove that it was indeed possible to fabricate oil repellent fabrics without the use of PFCs. Long story short, she did.

Sadaf’s breakthrough came when we truly started using the theory of wettability to understand how a fabric should be coated in order to repel oily substances. Because materials like silicones have inferior intrinsic oil repellency compared to PFCs, they would need the help of an additional length-scale of texture. In the same way that a fibre bundle exhibits many individual filaments along its surface, we calculated how oil repellency would change if each fibre was decorated with small, spherical particles. It turned out that this second level of texture allowed the fibres to mimic perfluoro-carbon chemistry! As long as the size and spacing between particles were within certain ranges, oil repellency was possible without the use of perfluorinated compounds, or so we theorized.

We also realized that a simple demonstration of the theory did not even require this additional texture scale. Simply choosing a fabric/chemistry combination that met our derived criteria meant that a fabric could be rendered oil repellent with simple silicone chemistry. Arc’teryx was more than happy to supply such a fabric, in this case a plain weave, highly twisted jacket inner liner. It took Sadaf just a few short weeks to demonstrate oil repellency with a silicone coating, something previously thought essentially impossible. A recent review article  [1] states that silicones, “exhibit zero or an inconsequential [oil repellency] without fluorination.” I suppose they did, until now.

Sadaf’s work demonstrates a few important points. Oil repellency is definitely possible without the use of PFCs and may be achieved with environmentally benign materials such as silicones. Liquids like vegetable oils, synthetic sweat, and water-ethanol mixtures were repelled by her fabric finish. The measured contact angle, a metric for characterizing liquid repellency, fit our established theory that took into account both surface chemistry and the texture of the textile weave. Moreover, an additional level of texture may be used to mimic PFC performance, as long as the size and spacing of the particles is properly controlled. To this end, different fabrics may require different finishes as the construction of the textile contributes to the liquid-repellent properties.

But the work is certainly not finished and the Patagonia’s and Arc’teryx’s of the world are not ready to use this fabric finish quite yet. The material has to last, and durability is the name of the game when it comes to coatings. Resistance to laundering, abrasion, and UV are just some of the additional requirements beyond oil repellency that are necessary before you’ll see this on apparel. There’s also the issue of the particles: how do you keep them on each fibre and how do you control their regular spacing along an entire garment? Are spherical particles even the best choice? Whereas, from a theoretical understanding we know things like cubes or cones would not work, we also know things like mushroom-shaped overhanging structures work best. Perhaps someone will innovate a way to grow this type of texture on a fabric. Only time will tell.

Looking back, the last 70 years of human history has been plagued by the continued accumulation of perfluorinated compounds in the natural environment. While functionally superior, their undeniable toxicity has finally convinced countries to begin their slow phase-out, but it will be our grandchildren’s children who potentially live in a PFC-free world. By challenging what can and cannot render a fabric oil repellent, we’ve shown that PFC-free oleophobicity is possible when the chemistry and surface textures are correctly designed. To all the graduate and future-graduate students reading this, I would encourage you to continue to challenge what you’ve been told is impossible, as often the richest innovations are uncovered in the unlikeliest of places.

This research was conceived and conducted on the unceded ancestral lands of the Syilx Okanagan Nation. The full publication, Rational design of perfluorocarbon-free oleophobic textiles,  may be found at https://www.nature.com/articles/s41893-020-0591-9

Any and all questions should be sent to the study’s lead author, Sadaf Shabanian (sadaf.shabanian@ubc.ca), or me, her supervisor, Prof. Kevin Golovin (kevin.golovin@ubc.ca). 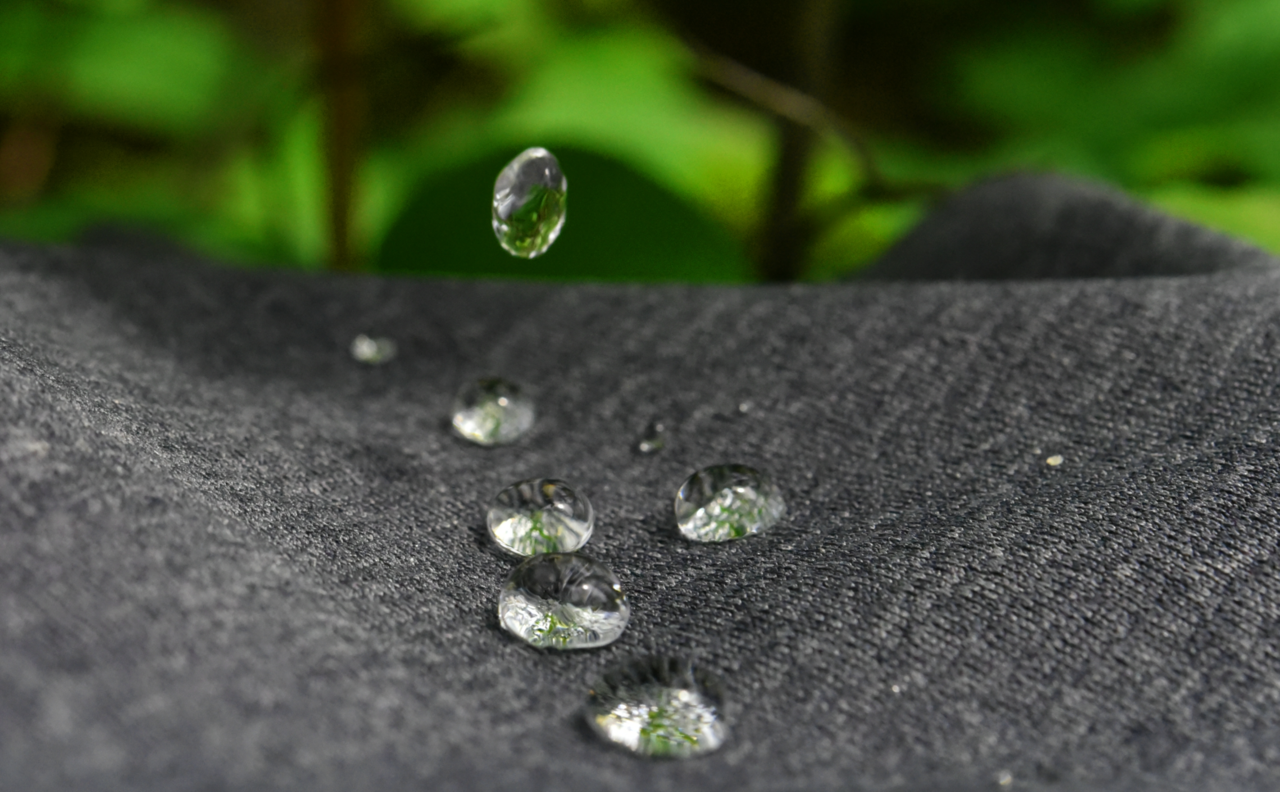 They're on your jackets, your cookware, and your hamburger wrappers, but they're also in your blood and can be found in the remotest places on Earth. Why can't someone make an environmentally friendly replacement for toxic perfluoro-carbons? Challenge accepted.