The Anthropocene concept, positioning humans as one of the main drivers of planetary change, had an immediate impact on how research about the Earth System was framed. It rapidly became a central organizing principle for the International Geosphere-Biosphere Programme (IGBP) synthesis project. However, the Anthropocene was still little known outside of the IGBP community. Two papers published in Ambio, discussed in detail in Ambio’s 50th Anniversary Collection: Anthropocene, played key roles in the development of the concept of the Anthropocene and its increasingly wide impact in the broader research community and beyond.

The emergence and development of the concept ‘Anthropocene’ was a collective, interdisciplinary effort from start. Following the work on the ‘Great Acceleration’ graphs quantifying the explosion of human activity since the mid-20th century first appearing in the literature in 2007, the first article, ‘The Anthropocene: Are humans now overwhelming the great forces of Nature?’ (Steffen et al. 2007), brought together as co-authors myself, Paul Crutzen, who in 2000 first introduced the ‘Anthropocene’ term and concept in an Earth System context, and John McNeill, an historian who had described in his landmark book ‘Something New Under the Sun’ the explosion of human activity in the 20th century and its impacts. The collaboration among authors from the geosciences and the humanities signaled the beginning of a long-term collaboration between these areas of research and scholarship, as well as heralding the importance the Anthropocene concept for all of humanity, not just the natural sciences.

Expanding the collaboration and the understanding of the Anthropocene, the second article ‘The Anthropocene: From global change to planetary stewardship.’ (Steffen et al. 2011) emerged as a working paper prepared for the “3rd Nobel Laureate Symposium on Global Sustainability: Transforming the World in an Era of Global Change", held in Stockholm in 2011.  The authorship team was an impressive array of scholars that collectively represented a very broad and deep knowledge of global change - two Nobel Laureates, numerous high profile natural scientists, eminent humanities scholars, and members of the leadership team of the Anthropocene Working Group. The product of this collaboration could best be described as a ‘grand synthesis’ of many important concepts that were emerging at that time - a synthesis that also generated new concepts and extended existing ones into new intellectual terrain.

Perhaps somewhat optimistically, we suggested in 2007 that by 2015 the dangers of the current trajectory of the Anthropocene would become apparent and that humanity would take decisive actions to change the trajectory from one based on exploitation of the Earth System to a pathway focused on stewardship. This change in pathways would then become Stage 3 of the Anthropocene. In retrospect, this prediction was eerily accurate. The landmark Paris Climate Agreement was reached in 2015, and the United Nations Sustainable Development Goals (SDGs) were adopted also in 2015. Now in 2020, it is not yet apparent that these international agreements really constitute a global tipping point; this next decade will likely be decisive in that regard.

The 2011 paper dug into this uncertainty and concluded by anticipating growing instabilities and crises in the future as human pressures on the Earth System increase. For example, the increase in size and destructiveness of large-scale disturbances has already been observed in massive heatwaves and mega fires. We also cautioned that geo-engineering, a form of “symptom treatment” rather than dealing with the origin of a problem, would be increasingly promoted. This caution is now being realised as we fail to deal with climate change. Finally, and again rather eerily, the paper foreshadowed the escalating risks of complex, multi-scale events like pandemics and the growing risk of multiple, connected crises at the global level.

An underlying theme of both articles is the use of complex systems thinking as a central tool for understanding the dynamics of the Anthropocene. At the global level, this approach was a contrast to the dominant narrative at that time of the physical climate research community that approached the climate change problem in a more classic cause-effect framework, and in 2011, had not yet employed the concepts of ‘global change’ and the Anthropocene. In contrast, the 2011 paper applied complex systems approaches to the Earth System, for example, via the role of biology in negative feedbacks and resilience, and the importance of concepts such as tipping points, phase locking and glacial-interglacial limit cycles in Earth System dynamics.

Now, 10-15 years on from these papers, I am left with the feeling that many of the cautions that they raised have fallen on deaf ears. In 2020 we are facing an emergency situation, not only in the climate but in the Earth System as whole as well as in globalised human society. Perhaps we need a sequel to Steffen et al. (2007; 2011) - a paper that focuses on solutions, such as social tipping points and fundamental, rapid transformations, rather than yet another diagnosis of the problem. The 2007 paper concluded with the statement: “Whatever unfolds, the next few decades will surely be a tipping point in the evolution of the Anthropocene.”  I strongly suspect that by 2030 we will have a much clearer picture of what the rest of the century holds for humanity, and much of the rest of life on the planet. By then we will have crossed the fork in the road, one pathway leading to a sustainable future initiated by the landmark 2015 agreements or the other leading to collapse and chaos. Which pathway we take is not at all clear; our future hangs in the balance.

Looking at the trends documenting the “Great Acceleration” in the 2011 paper, it is worth noting that the first graph, human population growth, displays a sharp inflection point around 1950. I fear we may already have passed that “fork in the road” that you speak of, one that might have put us on the path to sustainability: I suggest, to pick a somewhat arbitrary date, that we mark it from the first Earth Day, back in 1970, by which time word had gotten well around the globe that our human population was increasing fast, that this growth could not continue indefinitely, and (a conclusion that at least some of us reached back then) that the time to start pulling back was NOW—i.e., in 1970—more than 50 years ago today. So what were we doing, during all those 50 years? We already numbered more than 3 billion by 1970, but had we somehow shared an understanding of planetary finitude, started a serious effort to educate globally, and made contraception available in a non-coercive manner back then, just think how much better off we would be today—we might actually have been able to achieve “no hunger” and eliminate poverty! To say nothing of retaining the planet’s biodiversity, and looking forward to a reasonably secure future for generations of humans continuing on, perhaps indefinitely . . .  But no, for some reason—social inertia? simple denial? an inability to relinquish the triumphalism of belief in a “human project” that could grow forever?—we did not significantly change our path back then. We allowed ourselves to propagate the fantasy that somehow we could continue to increase in both numbers and in per capita consumption, infinitely—and now, as you say, we are “facing an emergency situation,” starkly confronting a globe rapidly running short of groundwater, propping up industrial agriculture with increasing inputs of nitrogen, phosphorus and synthetic chemicals as pollinators diminish, the oceans are overfished, and—even in the face of growing knowledge about its harmful impacts, as your colleague here reports, meat consumption of all kinds continues to expand.

How can we “focus on solutions,” NOW? The first thing I would suggest is that we who can clearly see what looms before us START BEING HONEST WITH OURSELVES. We simply cannot allow our “human project” to continue to expand along any of these dimensions—population growth, consumption of “resources,” the “Anthropocene defaunation” of food webs—and at the same time expect to have any sort of “sustainable future,” let alone fulfill all of the widely touted SDGs. And if telling the truth means recognizing that what we’ve already done means that many people who are already here WON’T be able to satisfy all the desires and expectations that our money-driven media has instilled in them, and that no, we collectively CAN’T add another 2-3 billion people to the planet (even if it means being called a “racist” by some), so be it. If there’s any chance at all for pulling things out of the fire at this late date, we’re going to have to start with a little honesty. 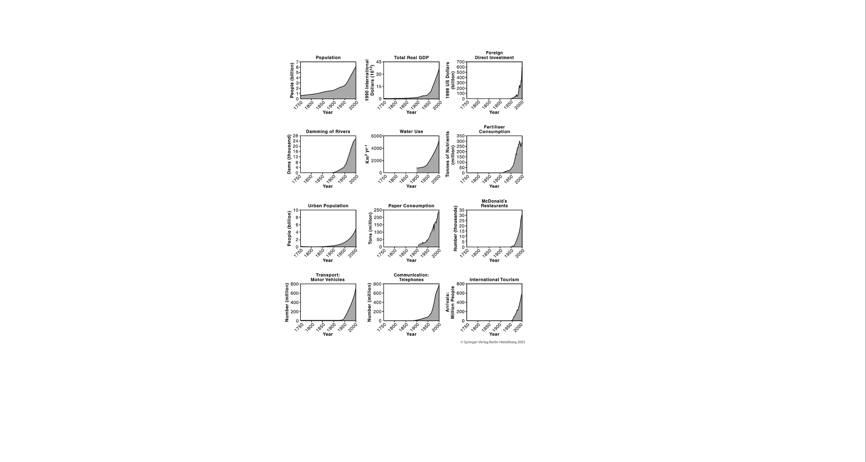