During the recent years, extreme cold winter weather hit the densely populated regions at the mid-latitude Northern Hemisphere. As one of the latest events, the Texas extreme cold in February 2021 caused widespread power outage and significant socioeconomic damages. Extreme cold weather in a warming climate deserves special attention. Important processes in the atmosphere that can cause extreme colds have been identified and investigated in detail. In the present study of Yin and Zhao (2021), we seek to understand the weather-climate interaction from a different angle and examine the possible role of ocean circulation in extreme weather. More specifically, we focus on the heat transport by the Atlantic Meridional Overturning Circulation (AMOC) and quantify its influence on the mid-latitude weather. The AMOC is the giant overturning circulation in the Atlantic with warm waters flowing northward in the upper 1000 m and cold waters flowing southward at depth. The Gulf Stream serves as its upper branch.

In the global climate system, the low latitudes receive much more solar energy than the high latitudes. The ocean and atmosphere, as the geophysical fluids, work together to efficiently transport the extra heat from the low toward the high latitudes. At the mid-latitude Northern Hemisphere, fast-moving turbulent weather systems are mainly responsible for the northward heat transport in the atmosphere. Extratropical cyclones and anticyclones move the cold air southward and the warm air northward, thereby causing intensive heat exchange.

In the ocean, the AMOC transports a large amount of heat northward on the order of 1 petawatts (1015 Watts). This results from the large temperature difference (~20°C) between its warm northward flow and cold southward flow. To investigate the influence of this ocean heat transport by AMOC on the mid-latitude extreme weather, we use a state-of-the-art global weather/climate modeling system with high resolution (GFDL CM4C192) to perform the so-called water-hosing experiment. In the hosing experiment, a freshwater flux of 0.6 million cubic meters per second is input into the northern North Atlantic. As freshwater is lighter and more buoyant than seawater, the perturbation freshwater inhibits the sinking of the surface water at the high latitude North Atlantic, leading to the AMOC shutdown.

Without an active AMOC in the hosing experiment, the atmosphere must transport more heat northward to compensate the reduced heat transport in the ocean. The enhanced atmospheric heat transport is realized through more active weather processes at the mid-latitudes. This is the so-called “Bjerknes compensation” mechanism discovered about sixty years ago by the pioneering meteorologist: Jacob Bjerknes. For the first time, we apply this mechanism to explain how the ocean influences the mid-latitude extreme weather. 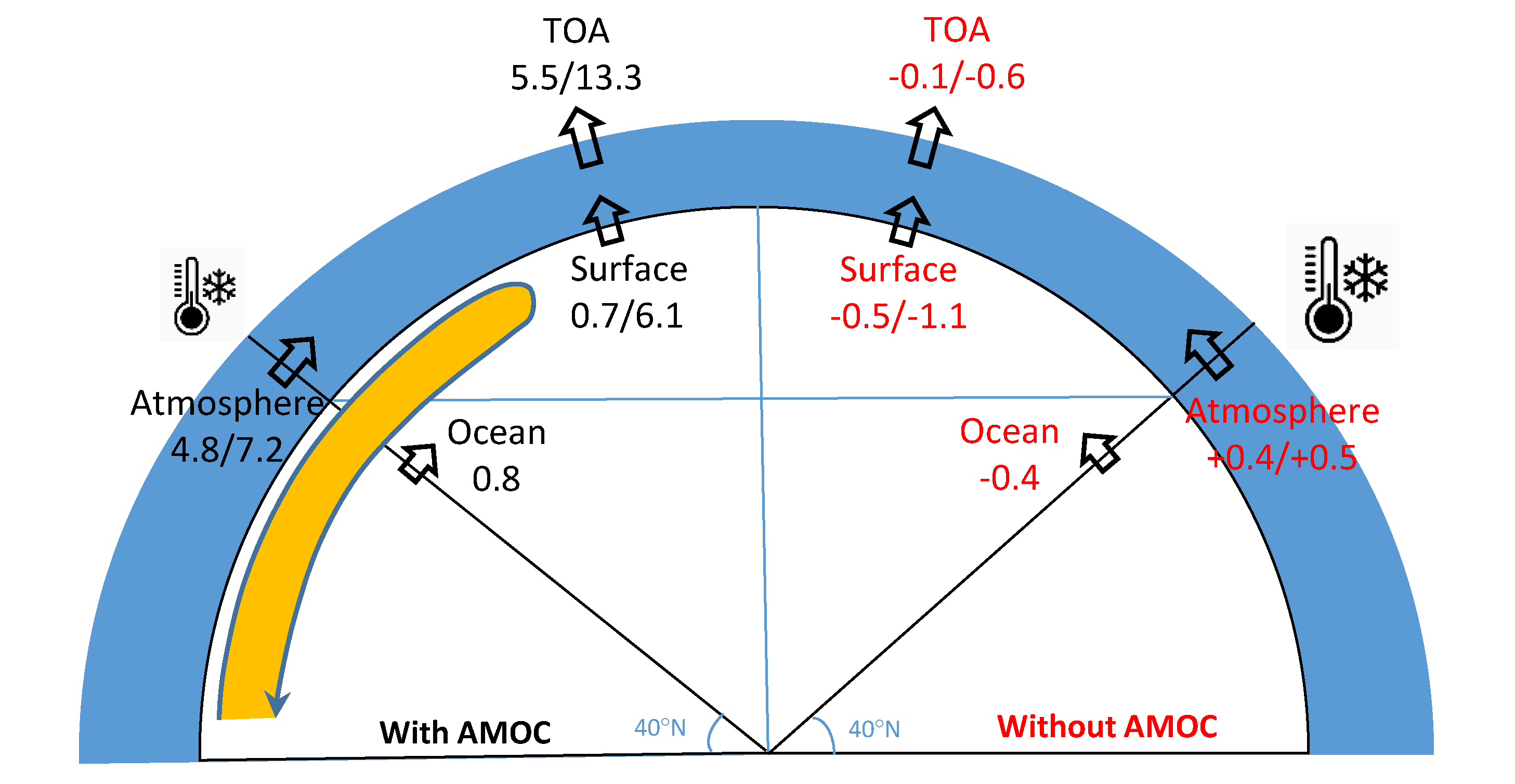 Fig. 1. Schematic shows the model simulated energy balance for the entire atmosphere north of 40°N in the climates with and without an active AMOC. The blue and yellow shadings denote the atmosphere and AMOC, respectively. The left half with black numbers (annual/DJF) shows heat fluxes (PW) at the top, bottom and southern boundaries of the northern atmosphere with an active AMOC. The right half with red numbers shows the heat flux anomalies after the AMOC shutdown. The positive and negative values indicate enhanced and reduced heat fluxes, respectively. Only the annual mean value is shown for the oceanic transport.

The model simulations suggest that after the shutdown of AMOC, extreme cold winter weather over the U.S. intensifies disproportionately compared with the mean temperature response. The drop of extremely cold daily temperatures could be up to 5-6 times larger than the mean temperature response. We choose Chicago, Houston and New York, three big cities representing the Midwest, South and Northeast U.S., to detail the impact.

As a caveat, our results represent a sensitivity study with idealized experimental design. One should be cautious about its implication about extreme cold weather in the future climate, as the greenhouse-gas-induced warming is not taken into account. Some recent observational studies suggest that the AMOC has weakened during the past decades. Our next step will be to consider all these important factors in model simulations and investigate their combined effect on extreme cold weather.

A disaster waiting to happen