The infamous ocean garbage patches forming on the surface of subtropical oceanic gyres illustrate that plastic is polluting the ocean on an unprecedented scale. In this study, we set out on a quest to shed new light on the long-term fate of floating plastic debris trapped in these giant vortices.

Plastic waste accumulating in the global ocean is an increasingly threatening environmental issue. Although research on the topic has attracted considerable attention in recent years, major knowledge gaps remain. A crucial scientific challenge at present is to determine the mass of plastic present on coastlines, the ocean surface and the deep ocean, as well as to quantify the plastic fluxes between these compartments. This task requires more observational data from remote areas that are difficult to access.

The deployment and monitoring phase of the first offshore cleanup system by The Ocean Cleanup (System 001), a Dutch non-profit organization dedicated to ridding the world’s oceans of plastic, offered us a unique opportunity to collect data on the vertical extent of plastic pollution in the eastern North Pacific Ocean. We were particularly interested in the amount and type of plastic we would find in the water column below the North Pacific Garbage Patch (also popularly known as the Great Pacific Garbage Patch). Such information is key to assess the persistence and long-term fate of floating plastic debris accumulating in these offshore waters.

As a sea-going scientist, I have joined many expeditions on research vessels before. However, this time, everything was different. Before heading offshore for more than a month, we first had to convert The Ocean Cleanup’s monitoring vessel, the Maersk Transporter, from an “empty” T-class offshore supply ship into a research vessel capable of collecting high quality samples spanning from the ocean surface down to a water depth of 2000 m. To do so, our team joined forces with engineers from CSA Ocean Sciences (a marine environmental consulting firm in Florida) and Maersk. After many hours of design and welding, the Maersk Transporter was successfully equipped with an A-frame, a slip ring winch with 5000 m conductor cable, an onboard laboratory, as well as with various scientific equipment such as Manta trawls, a Multiple Opening and Closing Net with an Environmental Sensing System (MOCNESS) for underwater trawling, and a CTD (Conductivity, Temperature, Depth) profiler. The experience was challenging but even more rewarding.

Thanks to the dedication of the engineers with various backgrounds and the skills of the vessel crew, the expedition turned out to be a great success. In total, more than 12’000 plastic fragments larger than 0.5 mm in size were collected and analyzed manually in our onshore laboratories in the Netherlands. The results published today in Scientific Reports revealed that there is a vertical transfer of microplastic from the surface of the North Pacific Garbage Patch into the deep sea below. This suggests that part of the floating plastic debris accumulating in subtropical oceanic gyres is lost into the underlying deep sea through fallout of small and once-buoyant plastic fragments. Our results further provide first clues that the water column of the North Pacific Garbage Patch, one of the world’s largest offshore plastic accumulation zones, is unlikely to harbor a major fraction of the tens of millions of metric tons of floating ocean plastic currently unaccounted for in the global mass balance of ocean plastic. Instead, the new results support an increasing body of evidence that a large part of the ‘missing’ positively buoyant plastic debris is likely circulating in coastal environments and only slowly making its way to offshore waters.

The findings of this study illustrate that plastic pollution has already reached the remote deep sea below the North Pacific subtropical gyre. How this pollution impacts the still largely undiscovered deep-sea ecosystem remains in the dark. The good news is that our data shows that most of the plastic mass in the North Pacific Garbage Patch is likely still afloat in the surface ocean. Thus, by reducing plastic emissions into the ocean and actively engaging in cleanup operations of the legacy material on a global scale, it is still possible to minimize the impacts of plastic pollution on deep sea ecosystems underlying subtropical oceanic gyres.

This study highlights that scientific collaborations between academic research institutions, non-profit organizations, and the private sector liberate numerous synergies, including the possibility to conduct extended research in remote and difficult to access oceanic gyres. Data from these plastic pollution hotspots are urgently needed to assess the lasting risks of ocean plastic pollution for marine ecosystems and to advance optimized mitigation strategies. 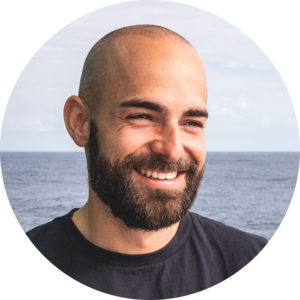 Matthias Egger is a marine biogeochemist working for The Ocean Cleanup Foundation. His broad research interests range from the transport and transformation processes of synthetic polymers in the ocean, the production and consumption of methane in the seabed, to nutrient dynamics in low-oxygen marine systems. Matthias obtained his Ph.D. in Marine Biogeochemistry at Utrecht University, the Netherlands. Before joining The Ocean Cleanup in 2018, he was a postdoctoral fellow at the Center for Geomicrobiology at Aarhus University in Denmark.
Follow

Many scholars have pondered whether smaller farms are better in terms of environmental, economic, and social outcomes. In our paper, we synthesize data from studies that have been conducted on this question over the last 50 years. We show that smaller farms have higher yields and biodiversity.

Navin Ramankutty
Springer Nature Sustainability Community
We use cookies to help improve your experience. By continuing to browse our website you are consenting to our use of cookies.
Learn more