The risks to human well-being of floods in the United States have long been overlooked and underestimated, particularly for low-income and marginalized communities. In Los Angeles, flood risks are disproportionately high for historically disadvantaged populations and communities already facing socia…

Managing the growing risks of flooding requires, first and foremost, awareness of them.  Our recent study of flood exposure in Los Angeles, California, suggests that the population exposed to a 1% annual chance of flooding is between 10 and 40 times greater than suggested by Federal Emergency Management Agency (FEMA) maps.

How could the FEMA number be so far off given its attention to detailed hydraulic modeling and floodplain mapping standards, and decades of work by local, state, and federal authorities to analyze and model the Los Angeles main stem drainage system?

There appear to be several reasons. First, FEMA directives call for mapping of fluvial (that is, river) and coastal (storm surge, waves) hazards but not pluvial (rainfall) hazards. In other words, the FEMA maps show areas that could flood because a stream channel can no longer contain a flood peak, or because coastal land is hit by high waves and storm surge, but not areas where rainfall runoff can’t be contained by street gutters. In Los Angeles County, urbanized land surfaces are immense—several thousand square kilometers in total—and these areas are at risk from rainfall. Second, modeling of flood hazards is sensitive to estimates of flood peaks and channel capacity used in hydraulic models. Cities have experienced rapid population growth and urban expansion over recent decades in the U.S. southwest and southeast which has amplified flood peaks. And over time, channels fill with sediment and grow vegetation (Fig. 1), which significantly reduces flow capacity compared to the initial design. However, the FEMA hydrologic and hydraulic model studies relied upon to support flood maps are often decades out of date and therefore not reflective of recent changes to flood peaks and channel capacity. Furthermore, modelers sometimes rely upon "as built" drawings of flood channel geometry, which overestimate channel capacity following in-channel sedimentation and vegetation growth.

FEMA is not alone in poorly estimating urban flood risks. Large-scale flood risk models used in nationwide studies offer relatively low accuracy in urban areas. Such models typically lack full knowledge and data characterizing urban drainage infrastructure and the condition of flood channels, levees, and dams, and they rely on a computational grid too coarse to depict the complex patterns of flooding that occur as runoff spreads across urban landscapes.

Adopting the grid resolution and site data necessary to resolve urban flooding might appear to be straightforward. Indeed, detailed modeling is routine in local-scale flood risk studies. However, challenges and barriers arise from the massive data and computational demands of expanding local-scale models over whole-city and larger spatial areas. We overcame this challenge with a new modeling approach. We began with a 3 m resolution digital elevation model (DEM) for Los Angeles based on aerial laser scanning data (also known as lidar data), which allow us to represent the topography across the region guiding flooding pathways and inundation patterns. Lidar data also capture the shape of channels with (Fig. 1)  and without (Fig. 2) sediment and vegetation. In Los Angeles, flood channels are dry most of the time (Fig. 2), so lidar data provide a good approximation of the bottom elevation and channel capacity. Next, we hydro-conditioned the lidar-based DEM by etching additional grooves in the land surface to represent subsurface pipes and culverts—features that strongly affect patterns of flooding. We utilized road network data and flood infrastructure data (i.e., subsurface drainage pipes and culverts) to guide the etching process. Additionally, we sharpened ridges in the DEM based on available levee data to ensure that the model accurately captures the capacity of channels and important blockage effects.

Following DEM preparation, we simulated flood inundation using the Parallel Raster Inundation Model (PRIMo), an innovative dual-grid flood inundation model that was designed specifically for whole-city scale modeling of flood hazards. We applied PRIMo to simulate the 100-year return period flooding based on three different hazard drivers: pluvial, fluvial, and coastal (Fig. 3). And to bracket uncertainty, each hazard driver was estimated at the 5th, 50th, and 95th percentile based on the fit of extreme value models to available gage data. To summarize, we developed a data-driven and process-based approach to provide the best possible assessment of today's 100-year flood hazard zone. We leveraged available lidar data, road network data, storm drain data, levee data, channel geometry data, and gage data within an innovative flood modeling framework that was designed specifically for whole-city applications. Validating this new modeling approach is difficult due to infrequent flood events and the challenges of observing urban flooding during extreme events. However, our prediction that channels are undersized to contain a 100 year event is consistent with independent studies of Los Angeles area flood risk by the U.S. Army Corps of Engineers and the Los Angeles County Department of Public Works.

Detailed modeling of flood hazards in Los Angeles now enables new understanding of the full extent and distribution of flood exposure and its inequities, which could be replicated for major cities across the U.S. and around the world. It creates a bedrock of evidence to identify at-risk communities and more equitably distribute resources for mitigating flood hazards and recovering from disasters. In our paper, we demonstrate how aggregating parcel-level data on flood depth and disadvantage by municipality can be used to prioritize resource allocation. The modeling framework could also be applied to test out the effectiveness of proposed flood measures—where and for whom. Such responses to address flooding include green infrastructure, levee projects, flood proofing, and grade-raising. Hence, our modeling approach is not only a tool to test for flood risk exposure and inequities; it is also a tool for designing fair and effective solutions.

Yet an important question for the U.S. now is the degree to which the 10-40 fold underestimation of flood risk found in Los Angeles is representative of the U.S. as a whole. Nationwide studies based on large-scale models have suggested that flood risk is underestimated by a factor of 2-3 due to the importance of pluvial flooding, and possibly more due to coastal flooding. However, large-scale models tend to be least accurate in urban areas.

Our work in Los Angeles validates the significance of pluvial flood risk identified in nationwide studies but also shows that fluvial flood risks—which are responsible for the deepest flooding across the region—are also underestimated. Collectively, these effects contribute to 10-40 fold greater exposure than suggested by FEMA maps.  It surely can't go unnoticed that severe urban flooding is occurring with troubling regularity, and major city after major city appears to be caught off guard by the severity of flood events, as well as smaller recurrent floods increasingly becoming the new normal. The nation’s population and commerce are concentrated in cities. Having a hope of reducing and managing intensifying flood risks necessitates a much better answer on the question of flood extent in urban regions.

Hi Brett and authors - I agree with your findings and sometimes the public and communities they do not have choices as because they do not know the detailed modelling data and the tools that explicit. That makes sense because they do not do this and would not know the more accurate findings. In some Global South or most of GS countries, these kind of services even lacking or simply has not been established. Thus - in the US, communities are well-off having the flood information but as the research suggested the FEMA should provide more accurate flood analysed information otherwise the public and communities perhaps wrongly trust their findings and affect their decision making on the flood preparation and responses. That is something I am thinking on improving the flood resilience as well. 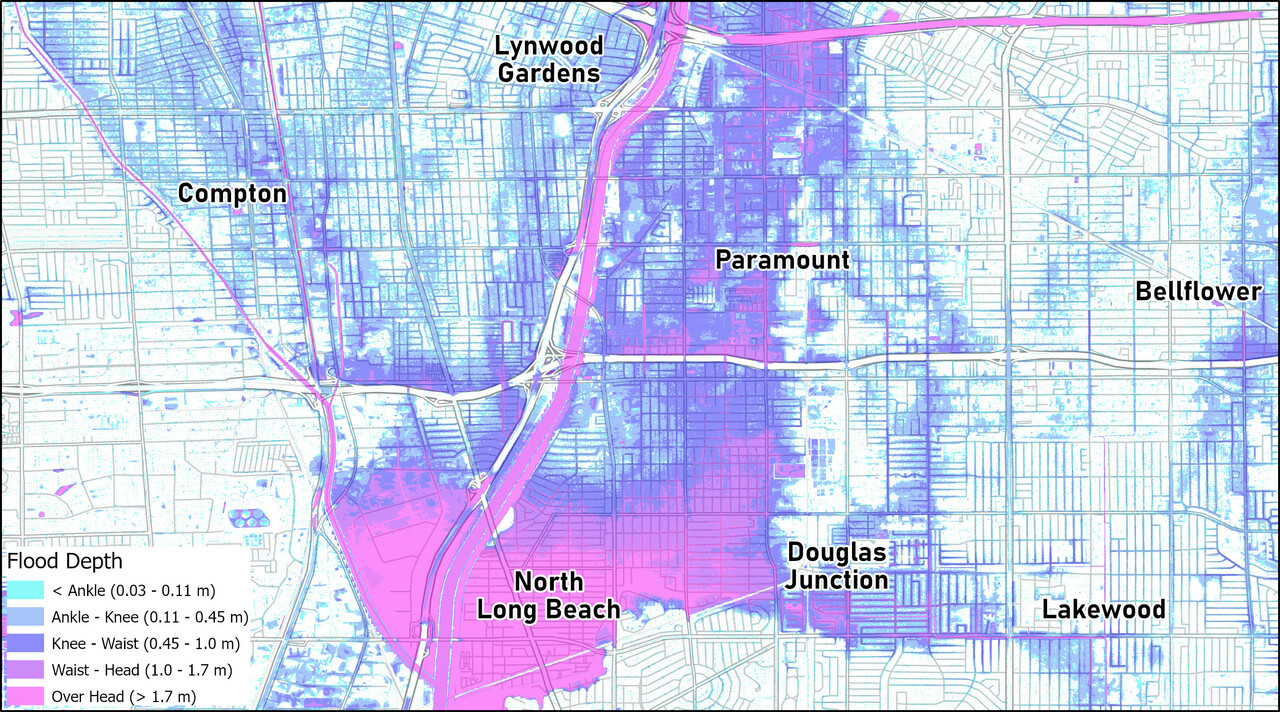