Glaciers are not just ice. They are a cocktail of ice and rock debris that accumulates at the surface to form elegant narrow bands, patterns that resemble latte art or create such extensive coverage you might not even realize there’s a glacier below. A new study investigates its significance.
Sam Herreid
Glaciologist, Unemployed/self-funded/homeless
Follow
Like

A global map of rock-debris cover on mountain glaciers shows its spatial distribution and evolution.

Anyone who has set foot on a glacier knows about the rocks. Sure, the ice, snow and mountains are what fill our Instagram feeds, but if you think back carefully, you’ll probably remember slogging through an expanse of precariously unstable rocks to finally reach the bare glacier ice.

Glacier modelers know about the rocks too. But when writing a model that can be applied to all glaciers on Earth, physical systems need to be simplified and cuts need to be made. Rocks rafting on the surface of glaciers were deemed too sparse to account for, and calculations of how glaciers might shrink, and thus how sea level might rise, were carried out without them.

That science will progress to include neglected terms in global models is not surprising. What is surprising, is that rock debris on glaciers seems to be a bigger omission than originally thought.

A layer of rock debris that is above a few centimeters thick will insulate the ice below from solar radiation and reduce the local melt rate. While ice melts, changes phase to water, and leaves the glacier as runoff, rocks that are entrained within the ice melt-out and accumulate at the surface. This causes an increase in the abundance of rocks towards the toe of a glacier where melt rates would, in the absence of debris cover, be the highest. This means that even if a glacier’s surface is 5 or 10% debris-covered, it is likely that these 5 or 10% are the locations that matter most for water resources. The problem gets more complex at the scale of a whole glacier, where glacier dynamics and features like ice cliffs and ponds need to be considered, but a rock layer will very likely reduce the net melt of a glacier and sustain ice for longer than expected into the future.

The simple first question is then: how debris-covered are Earth’s glaciers?

The answer, like most things in science, was not so easy to determine.

The color contrast between bare glacier ice and rock debris is quite strong. Just look at the banner photo of this blog post, it would not be difficult to write some code that separates the debris-covered ice from the bare glacier ice. There’s probably a filter on your phone that could do it right now.

But where do you get images covering all of Earth’s glaciers? Satellites are the obvious answer, but in order to map debris cover, you need the black swan of satellite images: a late summer image of an area that’s always winter, and a cloudless sky at a location that’s always cloudy.

It’s not so hard to sift through a satellite image archive to find a perfect scene over one glacier or a region of interest, but it would be a nightmare to do this for everywhere on Earth with glacier ice. Or, it was a nightmare that took about one year to complete. While there are big data approaches that consider stacks of images at each location to find, or sum to, a perfect image, these techniques still struggle in mountainous terrain, making careful manual selection the most successful approach at the present time.

The other key input to mapping debris cover is having an accurate map of every glacier. For this point, we can look back to the banner photo. The debris in the foreground is clearly enough part of the glacier, but what about the mountain bedrock that you can see in the background on the right surrounded in ice? If all of that bedrock was mistakenly considered to be part of the glacier, then the simple iPhone filter would call that debris cover too.

This might sound like splitting hairs, but if you manually identify and add up all of the area within the sole global glacier inventory available to scientists today that is identified as part of a glacier, but isn’t part of a glacier, the total comes to about 10,370 km2 or 3% of mountain glacier area.

With the images carefully picked and the glaciers carefully mapped, it finally becomes a simple few lines of code to locate the rock debris covering Earth’s glaciers – and our results show 7.3% of Earth’s mountain glaciers are debris-covered. This is almost twice as much as the only other published estimate. Considering the errors in the global glacier inventory, which sum to 3.3%, and the debris cover omission, the next generation of global glacier models now have key datasets needed to update the methods applied to 10.6% of Earth’s glacier area. Between melt calculated where there is actually no ice, and melt rates that are reduced from an insulating debris cover, updated estimates of sea level rise will likely be lower than those previously calculated.

Again, we can look at the banner photo and trace up-glacier one of the bands of debris: it becomes narrower or non-existent towards the head of the glacier.  With a bit of code, it’s possible to cut the glacier in two so that the lower portion of the glacier that can retain debris cover is separated from the higher, snow-covered portion where the glacier is gaining new snow and ice and cannot retain debris.

With an estimate of the ablation zone, it becomes possible to consider a new term, the debris cover carrying capacity of a glacier: for each glacier, of the area that can be debris-covered, how much is debris-covered?

It is tantalizing to apply anthropomorphized terms like “young glacier” or “old glacier” to these findings, but unlike a greying head of hair, glaciers aren’t necessarily resigned to becoming a babushka glacier as time goes on. In an albeit purely theoretical scenario, a cooling climate would likely reverse a glacier's “aging” and shed some, or even most, of its rock debris. A cartoon example of this trajectory is shown below, in a sustained warming scenario.

The concept of debris cover carrying capacity is only applicable in 2-dimensional map space. There is no clear limit to the volume of rock that can raft atop a glacier. However, considering the problem in 3-dimensions – including the thickness of the rock layer – is when things will get even more interesting. Keep your eyes out for several research groups to produce the first global maps of debris thickness. This will enable an estimate of exactly how much water is retained in the mountains rather than being added to Earth’s oceans.

While making a small contribution to our ability to predict the evolution of Earth’s glaciers and sea level rise has been a key motivation of this work, if the next time you stub your toe on a rock while walking to “the pretty part” of a glacier, you stop and wonder what that rock is doing for water resources and coastal real estate, then I will consider this blog post a success.

Sam Herreid
Glaciologist, Unemployed/self-funded/homeless
Follow
I have been studying rock debris on glaciers, specifically in the Alaska Range, since 2009. During my PhD at Northumbria University, UK I expanded the scope of my work to a global scale and continue this work to better resolve the glacier contribution to sea level rise and model future water resource scenarios. 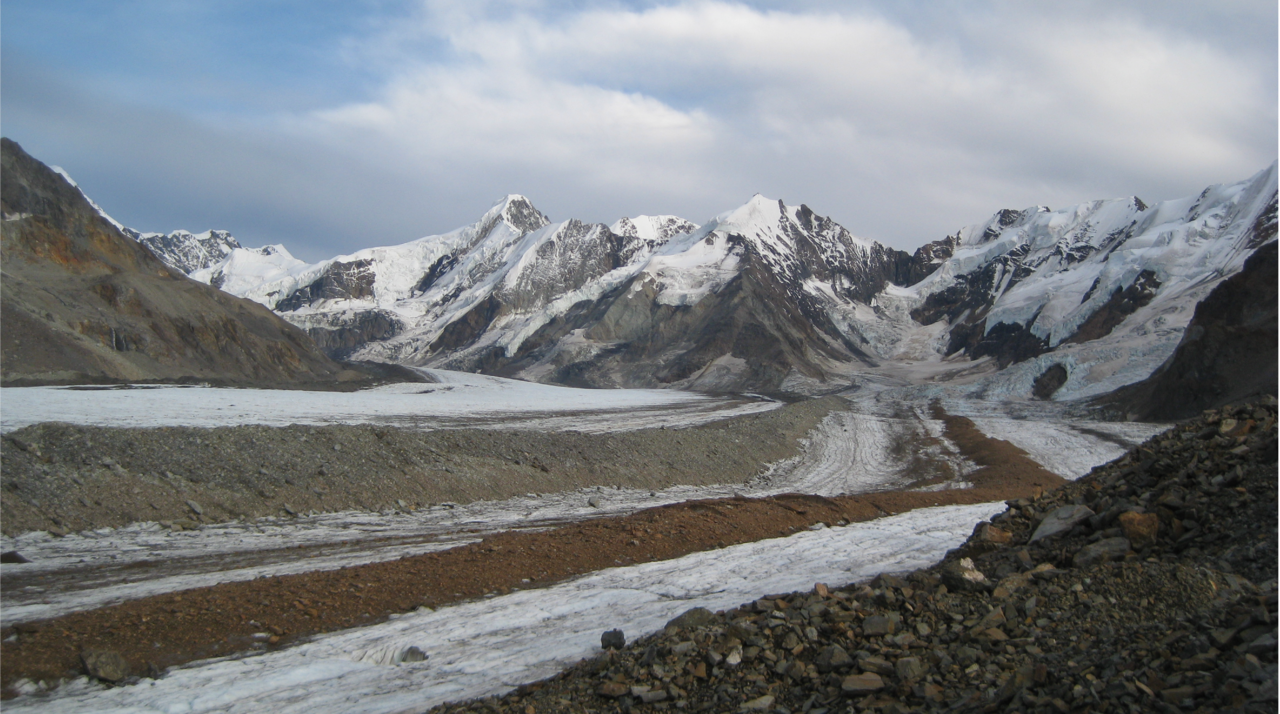 Glaciers are not just ice. They are a cocktail of ice and rock debris that accumulates at the surface to form elegant narrow bands, patterns that resemble latte art or create such extensive coverage you might not even realize there’s a glacier below. A new study investigates its significance.