Southern California is prone to considerable wildfire activity and associated costs. New research combining observational data with high-resolution modelling indicates that changing climate and lengthening of the usual wildfire season will increase this threat as the 21st century progresses.
Glen MacDonald and Chunyu Dong
2 contributors
Liked by Evelina Satkevic and 2 others

More frequent large wildfires and a lengthening of the fire season in southern California are projected under future emission and climate scenarios, according to machine learning and climate model projections.

Over the past four decades the annual area burned by wildfires in California has increased dramatically, with over 1,600,000 hectares consumed in 2019. Fire suppression costs have tripled since 2005, and the proposed budget for CALFIRE reaching almost $3 billion for 2021-2022. One estimate places the total economic cost of the particularly destructive 2018 fire season at almost $150 billion1.  Climate change and vegetative fuel conditions are contributors to growing size and intensity of wildfires. The development and growth of wildland-urban interface zones puts increasing numbers of people and infrastructure in fire-vulnerable settings.   However, aggregate state-wide numbers such as these mask the considerable geographic variability in wildfire regimes and human vulnerability within California.  Fully understanding the wildfire challenges confronting California requires finer-scale regional analyses. That was the objective of our work.

In our study "The Season for Large Fires in Southern California is Projected to Lengthen in a Changing Climate" we focused on the linkage between climate and large wildfires in coastal southern California.  Three important factors drove the research. First, southern California is home to over 23 million people, representing more than half of the state’s population. The hot and dry summer climate, coupled with flammable vegetation and large areas of wildland-urban interface, make southern California extremely vulnerable. Since the start of the 21st century, three of the 10 most destructive wildfires in the state’s recorded history burned in this portion of California and led to the loss of 6113 structures and 20 lives2. Smoke from wildfires is increasing recognized as a major health hazard in southern California and effects populations far removed from the actual fire. It has been estimated that during the particularly intense 2007 fire-season there were 760 excess respiratory-related emergency department visits in southern California3.  Second, although air temperatures have increased across the state, southern California, while experiencing large and costly fires, has not seen a significant increase in annual area burned over the 21st century. This is in contrast to parts of the state further to the north or in the Sierra Nevada Mountains which have4.  Third, at UCLA we have been involved in a larger research program studying regional differences in the sensitivity of California climate, vegetation and wildfire regimes to past, present and future climate change5 and this provided the opportunity of leveraging our resources and efforts for this study of coastal southern California.

We combined observational data on fires and climate with high-resolution modelling to tackle some specific questions of climate change and the future of southern California wildfire regime. We asked what climatic conditions produce large fire days in coastal southern California, and how will the climatic conditions associated with large fire days respond to future climate change driven by increasing greenhouse gasses? We also asked to what degree are the predicted changes in fire-associated climatic conditions dependent upon the greenhouse gas emissions scenario used in modelling future climate?  However, addressing these questions in the geographically small (~41,000 km2) and topographically/climatologically diverse spatial domain of coastal southern California required a degree of spatial and temporal resolution not typically employed in similar predictive climate-fire studies.  We began our work by acquiring historical fire perimeter data provided by the California Department of Forestry and Fire Protection. We focused on large fires (those greater than 40 hectares in area).  We collected daily climatic observations from 49 weather stations in the study area, and downscaled weather data for the historical period (1950–2005) and future (2006–2099) from the CMIP5 climate models (both data sets available from the Joint Fire Sciences Program).  We then collected daily data for National Fire Danger Rating System of fire behaviour and fuel conditions from the US Forest Service.  We applied a machine learning approach based on random forest algorithms6 to relate climatic and fire index variables to the occurrence of large fires over the period 1996-2010.

The random forest model performed well at simulating the probability of large fire occurrence based on climatic and fuel conditions (82%-84% accuracy).  Several climatic and fire/fuel variables were found to be statistically significant in predicting warm season and/or cool season days on which large fires occurred. Atmospheric vapor pressure deficit (the dryness of the air) and the moisture content of dead plant fuels were found to be the most important in predicting both warm and cool season days in which large fires occurred.  Based on modeling fire potential as climate changes in the future we concluded that by the end of 21st century large fire weather days will increase by 61% (22 additional days compared to the late 20th century) under the moderate greenhouse gas emissions scenario (RCP 4.5), and will approximately double (35 additional days compared to the late 20th century) under the high emission scenario (RCP 8.5).  One important result of these additional large fire days is an extension of the annual peak fire season further into the Spring and Fall.

These predictions of increased days with weather and fuel conditions favouring the occurrence of large fires are certainly concerning.  However, it must also be acknowledged that other factors, such as the occurrence of Santa Ana winds during a particular day, presence of an ignition source, capacity of fire suppression resources, landscape alterations by humans in the wildland-urban interface, or vegetation change due to climate change itself may all influence the occurrence of large fires in coastal southern California.  The increasing number of large fire days and the extension of the most intense fire season does not in itself predict that more large fires will occur, but it does significantly increase the annual odds of experiencing large fires. As the century progresses, there will simply be many more days each year when the alignment of factors such as Santa Ana winds, ignition timing and the geographic location of ignition can produce devastating wildfires.

Images below are of the November 2018 Woolsey Fire which burned 39,234 hectares of coastal Southern California in Los Angeles and Ventura Counties. The fire forced one of the authors, Glen MacDonald,  to evacuate his home in Ventura County.

Heavy smoke in the urban-wildland interface zone near the Los Angeles County – Ventura County line in Southern California during the November 2018 Woolsey Fire. (Photograph by Glen MacDonald – used by permission) 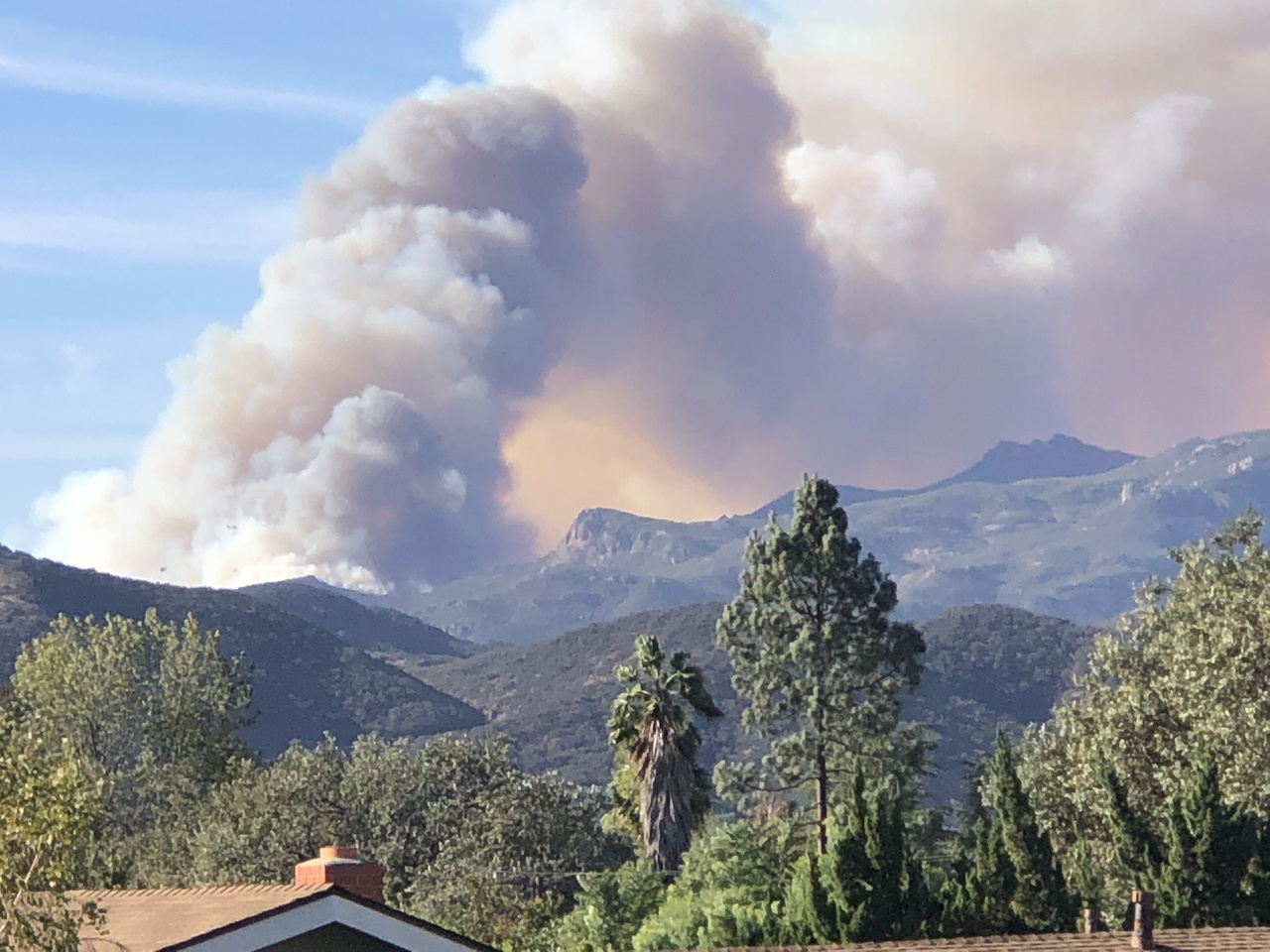 Southern California is prone to considerable wildfire activity and associated costs. New research combining observational data with high-resolution modelling indicates that changing climate and lengthening of the usual wildfire season will increase this threat as the 21st century progresses.