Poster: The link between below- and above ground biodiversity. Illustration: Gerda Peters, Fingerprint.

For much of the 20th century the importance of the soil biota for crop root growth, nutrient supply and suppression of harmful organisms was supplanted by intensive use of external inputs such as machinery, artificial fertilizers and pesticides. An article by Lijbert Brussaard and co-authors published in Ambio in 1997 was among the first to yet again highlight the role of soil biodiversity in sustainable agricultural land use.

Behind the Paper: Biodiversity and ecosystem functioning in soil: The dark side of nature and the bright side of life

Already Darwin made us aware that the soil fauna actually acts as an engine of ecosystem functioning. But this message was largely lost on the mainstream ecologists for more than 100 years (out of sight – out of mind?). There was some resurgence in the soil textbooks of the early 1900s. However, since the 1950s, the importance of the soil biota for ecosystem functioning became obscured in the literature on the suitability of soils for agriculture and other land use purposes.

Human ingenuity and technology was the focus and driver of productivity, dominant over the role played by nature. With strong links established between intensive agricultural practices, environmental problems and soil processes, soil biologists saw the necessity of reminding the soil science and agronomy communities of the lessons taught by Darwin and his early successors. However, in both research and policy arenas the tone was set mainly by plant and, to a lesser extent, animal ecologists, most of whom were still oblivious of life in the soil.

Our 1997 Ambio article Biodiversity and ecosystem functioning in soil was therefore timely and set the scene for future publications. The article was one of the first of a total of 43 scientific publications of the “Scientific Committee of Problems of the Environment” project on “Soil and Sediment Biodiversity and Ecosystem Functioning” (1996-2004), inspired and led by the visionary Professor Diana Wall of Colorado State University, USA.

A common thread in all activities was the explicit consideration of linkages between soils and sediments and between the interfaces between sediment and water or terrestrial below- and aboveground. The outcomes of workshops and ensuing research were discussed at the concluding meeting in the USA in autumn 2002 on the assessment of the most critical taxa, functions and habitats of soil and sediment biodiversity in terms of vulnerability, sustainability and management options, leading in 2004 to the final publication Sustaining Biodiversity and Ecosystem Services in Soils and Sediments (Wall 2004). This was, in its own words “the first rigorous synthesis of the ability of the biodiversity both within and across soils and sediments to provide ecosystem services”.

All of the publications confirmed the conclusion that the role of the biota in providing ecosystem services in soils and sediments declines as human use intensifies. When Diana Wall, who is still going strong at CSU, was asked in a recent BioScience podcast what she would like to be remembered for, she said:

I hope that we, a number of us, my colleagues who work on these unseen, hidden foodwebs beneath our feet, are remembered for getting them into mainstream ecology and into the decisions we make on how we manage land. This is changing, but for a number of years they were really not considered unless they were pests or pathogens, but now there is many more ways we look at the diversity of life beneath our feet.

In several cases, efforts were part of international programs such as the Global Soil Biodiversity Initiative and the International Year of Soils (2015). In addition, the community of researchers also contributed to programs with a broader mandate than just soils, e.g. the Millennium Ecosystem Assessment and the Sustainable Development Goals; DIVERSITAS: International Programme of Biodiversity Science which merged into Future Earth; and IPBES: Intergovernmental Science-Policy Platform on Biodiversity and Ecosystem Services, in an effort to make “the dark side of nature” part of “the bright side of life”.

All articles in Ambio's 50th Anniversary Collection: Agricultural land use

Brussaard, L. 2021. Biodiversity and ecosystem functioning in soil: The dark side of nature and the bright side of life. 50th Anniversary Collection: Agricultural land use. Ambio. Volume 50.

De Bremond, A.C. 2021. The emergence of land systems as a cause and consequence of global change and as the nexus of sustainability transformation. 50th Anniversary Collection: Agricultural land use. Ambio. Volume 50. 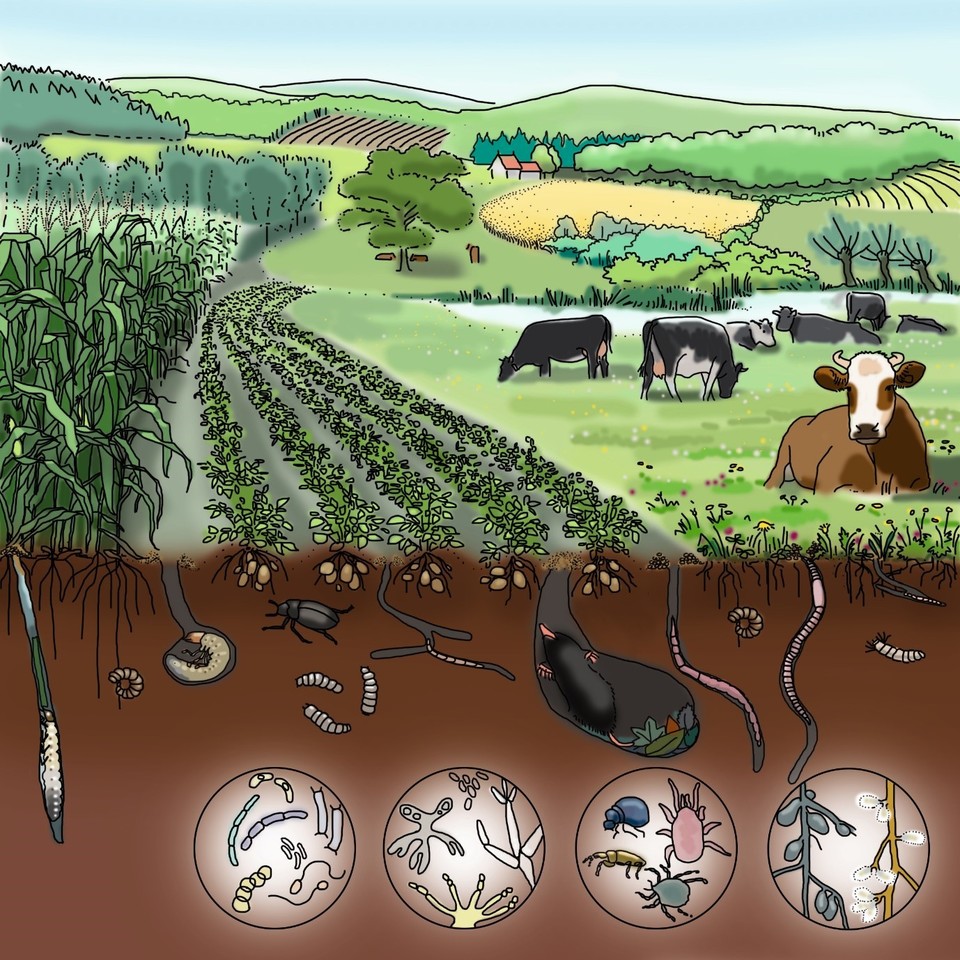 Biodiversity and ecosystem functioning in soil