The unique ecology of the Galapagos Islands has been admirably conserved by Ecuador in recent years, but policymakers have inevitably needed to make tougher choices with development on the mainland (artwork credit: Jane Tomlinson - @JaneSunFlower)
Saleem H. Ali
Blue and Gold Distinguished Professor of Energy and the Environment, University of Delaware and GEF Science Panel
Follow
Like Liked by Evelina Satkevic and 1 other
0

The allure of the Galapagos Islands as the cradle of Darwin's insights on natural selection remains a major draw for scientists  to the volcanic archipelago. Located less than a thousand miles west of the South American mainland, this exotic evolutionary outpost is at a "goldilocks distance" from the mainland : close enough for occasional  wildlife like turtles and iguanas to float across intact, while distant enough for populations to evolve independently.  New species continue to be discovered, including the highly endangered pink iguana which was only identified in 1986, inhabiting  a remote high altitude active volcanic ecosystem on the island of Isabella.  In February 2022, a publication in  Nature's journal  Heredity identified a new lineage of Galapagos giant tortoises from museum samples  and carcasses found in a cave on one of the islands.

There were no indigenous human settlements on the islands, and Ecuador claimed them as overseas territory in 1832. Despite Darwin's momentous visit in 1835 and the subsequent popularization of the islands for their unique ecology, their conservation value was hard to monetize.  Due to their lack of extractable resources, Ecuador tried to sell them to various countries during the early twentieth century. Some of the islands  became penal colonies while others were ravaged by feral goats and invasive botanicals. The devastation caused by these practices led to a domestic environmental movement in Ecuador, leading to the designation of the islands as a National Park in 1959.

The global environmental movement gathered momentum after the Stockholm Conference in 1972 and the islands were designated a UNESCO World Heritage Site in 1978 (the first in the world to be declared for natural heritage). This put further pressure on the government of Ecuador to institute conservation policies and limit development on the islands.  The small settler population on the islands came into considerable conflict with the park service, including a hostage situation in the 1990s where settlers demanded higher sea cucumber harvesting quotas from the park service. With global interest in tourism of the islands, the park service has since delicately managed  economic activity for the settlers on the island who own property prior to national park designation. The islands themselves are being heralded as a microcosm of sustainability initiatives, ranging from the world's first entirely "green powered" airport, to ambitious decarbonization targets for the entire archipelago.

Seasonal changes in ocean currents and air flows in this part of the Pacific Ocean leads to unusual conservation challenges. Fish diversity changes dramatically with these variations and has been a major focus of recent research. The wetter summer months provide abundant foliage and proliferation of wildlife on land but are also the time when the warmer water has less nutrients and many fish species migrate to colder waters. This pattern is reversed in the drier winter months when marine life is far more abundant but terrestrial organisms take shelter.

There are ongoing concerns of invasive species and pests which are being studied across the islands. The government has instituted a strict quarantine system on arrival where customs checking is done painstakingly to ensure no food is brought in. The biggest challenge of feral goats has largely been eliminated thanks to an innovative and persistent culling campaign which started in 1997 on Isabella island. First, herding techniques were used to get the goats to congregate with helicopters and then gunned down with rapid machine gun fire to mitigate suffering. However, this only got about 90% of the goats, since they learned to link the sound of propellers with impending death. Sterilized  female goats (known as Judas Goats) were then fitted with radio locators and scented with long-lasting hormones that made it seem like they were permanently in heat. This false promise of procreation lured previously hard-to-catch goats as well. Some 250,000 goats were culled during seven-year project, with pretty much only the Judas Goats now left to roam.

Although close management of waste streams has kept marine macroplastic pollution under control on the islands, microplastic pollution in seawater  is widely observed and is being closely monitored for its impact on organisms. Overall, the Ecuadorian government has done a remarkable job in the past decade in maintaining their conservation commitments to the Galapagos. Despite pollution threats, tireless efforts by the park service and organizations such as the Charles Darwin Foundation have led to a rebound of nearly extinct species such as  the endemic tortoise species on Espaniola island.  However, for a country which still faces major human development challenges, conservation efforts inevitably require monetization and a consideration of tradeoffs with other industrial choices.

Extractives and the Ecuadorian development imperative

Recognizing the need for near-term poverty alleviation, while also prioritizing conservation, led the former president of Ecuador, Rafael Correa, to propose a grand bargain of conservation on the mainland. In exchange for not extracting oil from the highly biodiverse Yasuni National Park in the Amazonian rainforest region of the country, he asked for a pledge of $3.6 billion from the international community (half of what Ecuador would have realized in revenue from exploiting the resources at 2007 prices). More than $1.67 billion of this amount were raised largely from donations by Germany, Spain, France, Sweden and Italy. However,  the president decided to discontinue the effort as a commission on the economics of the funding concluded that adequate funds had not been received to offset the benefits of oil extraction.

During a field expedition to the Galapagos in March 2022, I had an opportunity to meet one of the architects of the Yasuni deal as well as an earlier "debt for nature swap", Roque Sevilla Larrea. Having served in many prominent public service roles  as the Director of the country's Forest Service as well as the Mayor of Quito, Mr. Sevilla has strong environmental proclivities but is also a prominent businessman. Among his businesses is the country's largest tourism company Metropolitan which operates expeditions to the Galapagos as well as the only full-service resort in the archipelago.  Give this broad experience in the public and private sector, the current president of Ecuador Guillermo Lasso has also asked for Mr. Sevilla's advice in finding a way to conserve treasured ecosystems like the Galapagos, while also helping to develop the country at a time when it is struggling with massive debt. No doubt the oil revenues at a time of high prices could help to buffer Ecuador's economy and allow for greater political space to champion conservation.

However, Mr. Sevilla's recommendations to  the government are focused on three key areas for investment related to connecting the food-energy-water nexus:

a)  Developing voluntary carbon markets that capitalize on the three key ecosystems in the country with high sequestration potential: i) tropical humid forests ii)  Andes paramo  and iii) the coastal mangrove forests.

b) Upscaling geothermal energy investment in a country with massive volcanic activity , with an initial target of a 50MW plant coming online in 2026. There are four major geothermal basins in the country which have yet to be harnessed for this purpose.

c) Green hydrogen development using photovoltaics (since country has second largest solar potential on continent after Atacama region), and hydropower with technical and financial assistance from the Inter-American Development Bank's clean energy investment mechanism. So far Ecuador has only developed 40% of its run-of-the river hydrological potential (not requiring large dams).

The success of these efforts will largely depend on how well they can be pitched as a means of balancing conservation with development. The preservationist impulse is still strong among many indigenous communities in Ecuador who also won a major lawsuit against metal  mining development near the Colombian border.

As the nation comes out of a painful COVID crisis that specially impacted the largest city of Guayaquil, there is trepidation but hope for a greener recovery. While some commentators have recently suggested that a green recovery is a "distant dream" for Ecuador, my field observations suggest more cautious optimism. The country's lessons of prioritizing conservation in the Galapagos, while considering a range of green growth strategies with more conciliatory politics than many of its neighbors, bodes well for its development path. 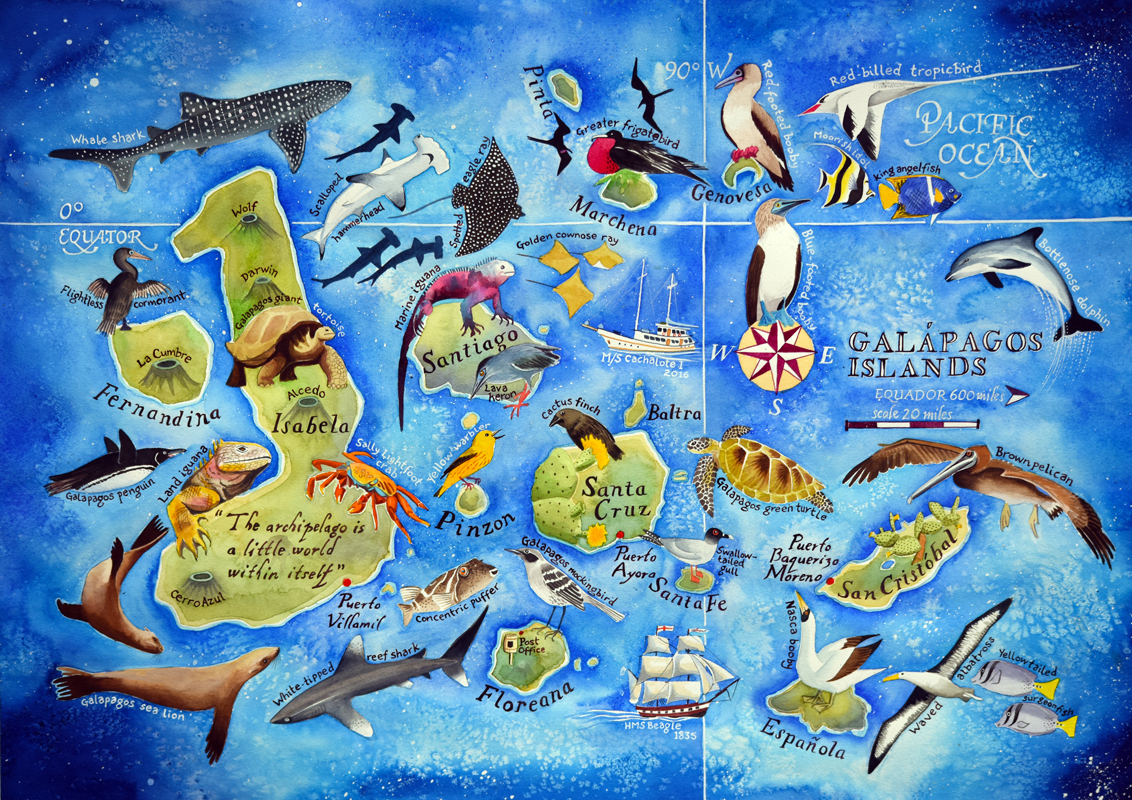 The unique ecology of the Galapagos Islands has been admirably conserved by Ecuador in recent years, but policymakers have inevitably needed to make tougher choices with development on the mainland (artwork credit: Jane Tomlinson - @JaneSunFlower)