The Human Burden of Coastal Subsidence

Coastal residents are concentrated in subsiding areas and hence experience average rates of relative sea-level rise three or four time higher than the global average suggests. This human burden of coastal subsidence needs to be both recognised and effectively addressed.
Robert Nicholls
Professor, University of East Anglia
Follow
Like Liked by Douglas Costello
0

Land subsidence and uplift influence the rate of sea-level rise. Most coastal populations live in subsiding areas and experience average rates of relative sea-level rise three to four times faster than due to climate change alone, indicating the need for policy to address subsidence.

There is widespread concern about climate-induced sea-level rise and its burden for the world’s coastal zone, especially coastal cities, deltas and small islands. However, coasts and coastal residents experience relative sea-level rise which sums the rise of the ocean due to global warming and uplift or subsidence of the land due to natural and human-induced geological processes. I have been thinking about this issue in the context of climate change over the last 30 years. What are the implications of the uplifting coasts in high latitudes, such as Hudson Bay versus the ‘below-zero’ (i.e. below sea level) cities and subsiding deltas which are prominent around much of Asia’s coast? As the subsidence is in large part linked to human agency – with groundwater withdrawals and drainage in deltaic and alluvial plain areas driving much of the observed subsidence, the relationship between high population-density/economic-activity and high rates of subsidence was clear. Locally, the burden of subsidence is high, greatly exceeding current climate-induced sea-level rise in some locations. With present subsidence rates of up to 10 cm/yr and 4 m net subsidence in the last 70 years, Jakarta (see image) is the global hotspot of this problem – but there are many subsiding cities in Asia. In Tokyo, parts of the city have subsided by 4m during the 20th century, with 2m to 3m of subsidence reported in Osaka, Shanghai, Tianjin and Bangkok, as well as New Orleans. USA. Deltas do not subside so rapidly, but as they occupy a much larger area and contain significant populations these effects remain significant in global considerations.

Our paper in Nature Climate Change has helped to answer my question. For the first time, we placed these subsidence processes in a global framework rather than as series of local cases. We consider global climate change and the three most significant components of geological processes on relative sea level: (1) glacial isostatic adjustment due to ice loading and unloading; (2) deltaic subsidence reflecting natural and human-induced subsidence; and (3) additional human-induced subsidence of susceptible cities built on deltas. GIA is global in its influence while deltaic and city subsidence occur in specific locations, but locations where there are generally high populations and potential for rapid subsidence. The burden of sea-level rise depends on how you measure it. By coastal length, these geological trends are small and climate change effects dominate relative sea-level rise around much of the world’s coasts today – we estimate an average rate of 2.6 mm/yr. However, if you estimate the changes experienced per coastal resident – the median relative sea-level rise is about 5 mm/yr and the average relative sea-level rise is 7.6 to 9.9 mm/yr, so the human experience of relative sea-level rise is up to four times faster than global averages! At least half this rise is due to deltaic and city subsidence and the present burden of relative sea-level rise for coastal populations has been seriously underestimated.  This has been the case for the last few decades and this is likely to continue without dramatic change.

What can we do to address subsidence beyond what is being done today? At one level there are the technical challenges of understanding what measures are available to address subsidence and relative sea-level rise. Subsidence control is more fundamental than adaptation as it removes the source of the problem and slows or stops loss of land elevation. In cities, subsidence control is fundamentally about managing/reducing groundwater withdrawals which usually involves providing alternative water supplies. Cities such as Osaka, Shanghai and especially Tokyo have been successful in reducing subsidence with this approach, and in the case of Tokyo stopping it almost entirely. Equally in other cities such as Manila and especially Jakarta, subsidence is ongoing with no sign of any effective control. In 2019, the Indonesian government proposed moving their capital to Borneo, in part as a response to this problem. In deltas similar issues emerge. Again controlling and maintaining groundwater levels provides a means to control subsidence. In addition, controlled flooding and trying to work with natural sedimentation provides a potential means to raise land elevations in agricultural areas, if the sediment supply is sufficient. This approach would involve a fundamental change in thinking of controlling and managing floods rather than excluding them totally. Beyond the technical measures, there are profound social questions which need to be considered – will delta populations support this strategy and how can their livelihoods be sustained under this new management regime?

Hence, governance and implementation are key dimensions of finding a solution – networks of cities and/or deltas sharing experience on subsidence could offer great benefits for learning and exchange of good practise. Similar networks have already developed in response to climate change in cites. Further there are calls for investors to understand their exposure to climate change, and there could be similar efforts to assess the implications of coastal subsidence among donors such as the development banks. Given the scale of coastal subsidence and resulting relative sea-level rise for coastal populations this is also relevant to the Sendai Framework for Disaster Risk Reduction. Lastly, addressing subsidence is entirely consistent with addressing climate-induced sea-level rise via climate mitigation and adaptation. It is not a case of one or the other: both issues need appropriate responses to find long-term solutions in these vulnerable areas.

Poster Image: The "Waladuna mosque" in the Muara Baru, district, in northern Jakarta showing the effects of subsidence as well as a new defence to stop inundation to the right. Note that the crest of this defence is also sinking as the city continues to subside. (Photograph kindly provided by Dr. Miguel Esteban, Waseda University, Tokyo, Japan, taken 28th March 2018).  https://goo.gl/maps/LEpJh3xjjmqgFbUv9 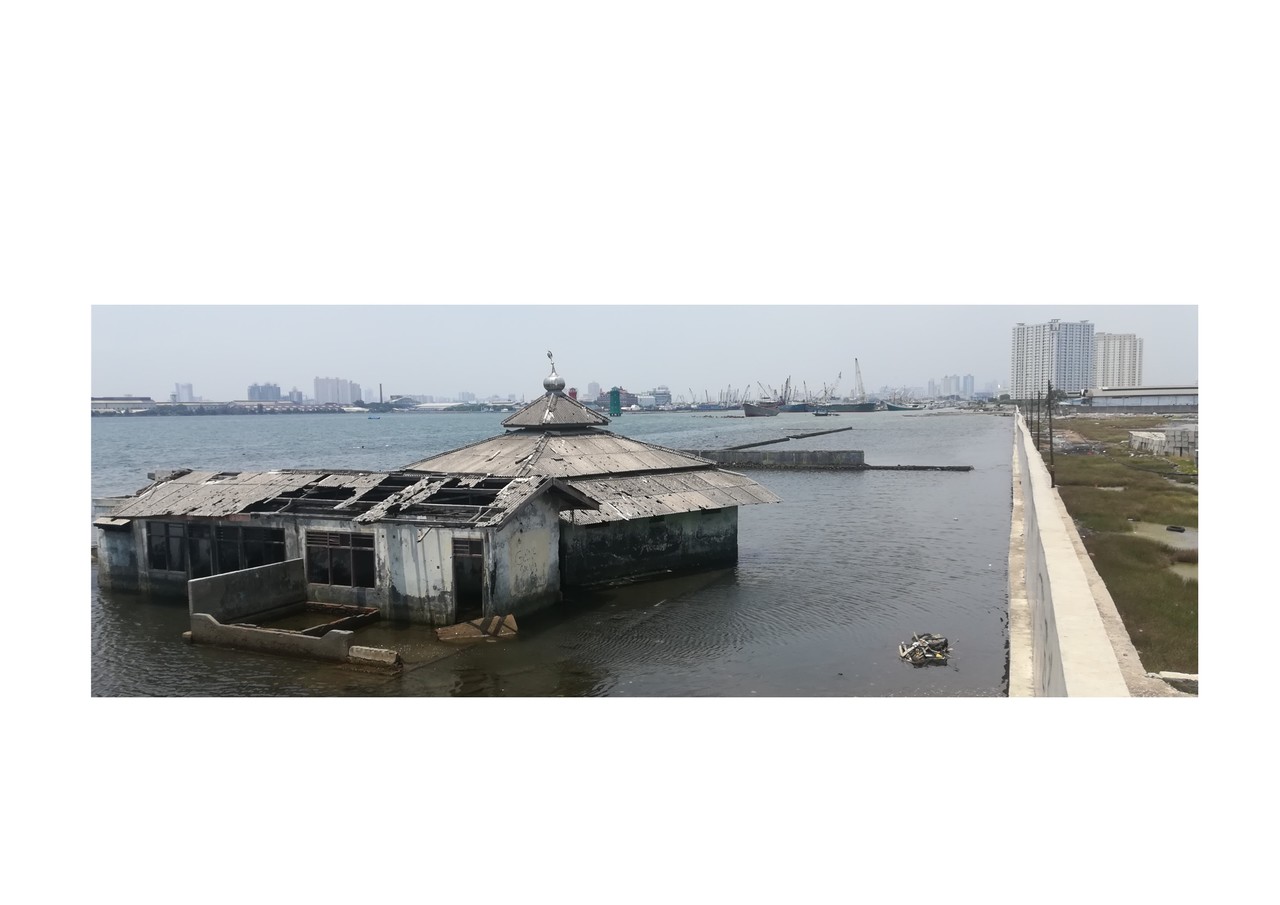 The Human Burden of Coastal Subsidence

Coastal residents are concentrated in subsiding areas and hence experience average rates of relative sea-level rise three or four time higher than the global average suggests. This human burden of coastal subsidence needs to be both recognised and effectively addressed.