Small-scale soil hydraulic properties can be accounted for in large-scale hydrologic and climate models by incorporating vegetation influences on soil structure, informed by global-scale vegetation metrics and soil texture data

The growth and decay of plant roots and the activity of earthworms and other burrowing organisms that feed on plant residues create a network of interconnected burrows in the soil called macropores (Fig. 1). Such biologically-promoted soil structural features strongly favor infiltration of water into the soil (particularly during high intensity rainfall events) and may dominate local hydrological fluxes in natural landscapes such as forests, that cover nearly 30% of the Earth’s land surface. Specifically, soil hydraulic properties control the partitioning of rainfall between infiltration and runoff, thus affecting both groundwater recharge and surface water resources. Yet, despite decades of research on soil structure and its well-established role in regulating these water fluxes, attempts to include these effects in models remain limited. Particularly, the role of soil structure in large scale Land Surface and Earth System models commonly used for hydrological and climatological applications is largely ignored. These models use soil parameters derived from laboratory-scale measurements often based on samples from relatively uniform soils (mostly agricultural fields) thus avoiding “complications” of soil structure.

To bridge this soil representation gap, Bonetti and co-authors provided a blueprint to incorporate soil structure effects into soil hydraulic properties by capitalizing on the ever-increasing availability of spatially resolved soil maps and vegetation metrics from remote sensing. In the analysis, the authors focused on the primary effect of biologically-induced soil macroporosity (i.e., presence of roots) on modifying the soil saturated hydraulic conductivity, a key variable describing the ability of soil to transport water. Building on previous studies, they first derived functional relationships between the soil saturated hydraulic conductivity and vegetation metrics (such as above ground vegetation biomass and Leaf Area Index) across different soil types. This highlighted how the proper quantification of soil structure effects is not merely related to the amount of vegetation/biological activity, but the magnitude of its effect is strongly dependent on the type of soil under consideration (e.g. fine-textured clay vs. coarse sandy soil). Bonetti et al. then included the proposed parameterization in catchment-scale simulations and demonstrated that small scale soil structure features (such as roots) can substantially alter the magnitude of infiltration and runoff even at the large scales relevant to Land Surface and Earth System models.

This work provides a mechanistic strategy for model parameterization across scales, rather than ad hoc tuning and empirical calibration often performed in practice to account for the effect of soil structure. Such improved realism is particularly relevant to enable more reliable modeling applications under future climate scenarios. 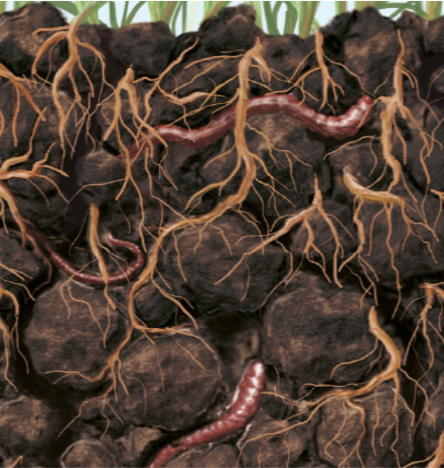