Global population growth and land development are highly imbalanced, marked by 43% of population increase but 150% of built-up area expansion from 1990 to 2018. This results in the widely-concerned ghost city phenomenon and runs against the sustainable development goals.
Xiuyuan Zhang and Xiuyuan Zhang
2 contributors
Like Liked by Evelina Satkevic
0

The phenomenon of ghost cities can be traceable to a notable media report in 2009 from Times  with presenting an evidence of Ordos, a modern but almost entirely vacant town. Ghost cities were early used to describe resource exhausted and shrinking cities, where the original industry is facing structural crisis and populations have been decreasing for more than two years, such as Detroit. While recent studies consider ghost cities as newly developed places with drastically fewer people and businesses than there is available space for. According to the definition, a number of researches are carried out to extract ghost cities from nightlight satellite images, positioning, social media, and point-of-interest data. These studies consider only population sizes but totally ignore land carriers, and thus fail to model human-land relationship, leading to inaccurate extraction results of ghost cities. To resolve this issue, existing studies measured built-up area and population to define a ghost city index and further found ghost towns with uncoordinated human-land relationship in Ordos. Similarly, most existing researches on ghost city extraction consider the amounts of urban area and population whose relationship and equilibrium state however are uncertain, and they totally ignore the heterogeneity of land, i.e., variant land functional structures, which are fundamental to accessing land carrying capacity. Besides these technical issues in modeling and extracting ghost cities, ghost city analyses have encountered bottlenecks. That is, Wade Shepard who proposed the widely recognized definition of ghost city gave a report on Reuters entitled "The myth of China's ghost cities", demonstrating that there could be no ghost city but only ghost city stage in China, as ghost cities would disappear with the development of urbanization and the influx of population, which made ghost city studies insignificant and lose popularity.

We recognize that the definition of ghost city narrows the research development, which focuses solely on population density with considering residential/built-up area. Here, we define a novel concept of "underload cities" to describe the cities carrying fewer people and lower economy than their land carrying capacity considering the inherent land functional structures. According to the definition, underload city is actually a broad sense of ghost cities, as it considers both population and economy as loads and regards all kinds of land functional structures (not only residential area but also industrial, commercial, parks, farmland, etc.) as carriers. Essentially, underload cities represent the uncoordinated relationship between human and land, which will always exist in the whole process of land construction and human development; thus, discovering underload or potential underload cities is conducive to re-integration of land resources, coordination of human-land relationship, and promotion of sustainable development.

Here, we will follow a general idea of "land functional zone representation  -> land carrying capacity estimation -> underload cities identification". Based on the idea, we use very-high-resolution (VHR) satellite observations and statistical yearbook data to automatically discover underload cities from 81 major cities in China. 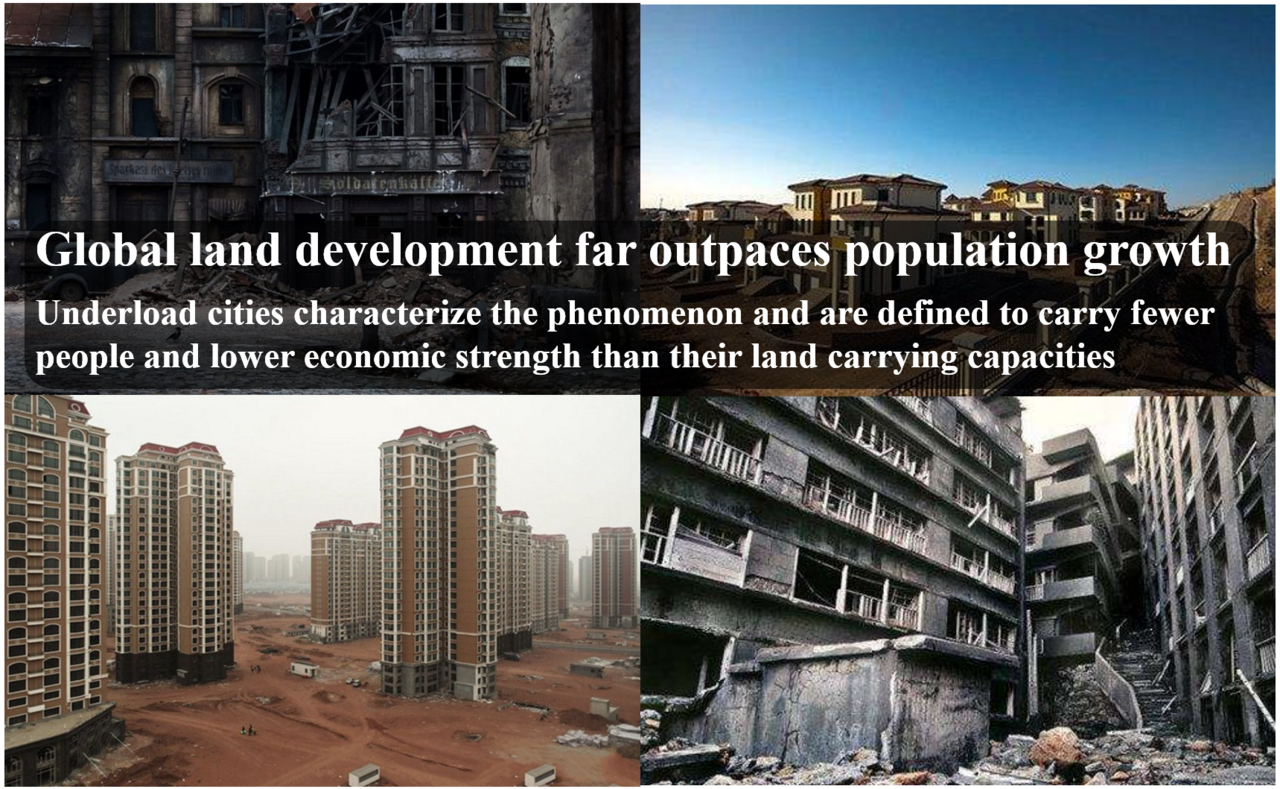 Global population growth and land development are highly imbalanced, marked by 43% of population increase but 150% of built-up area expansion from 1990 to 2018. This results in the widely-concerned ghost city phenomenon and runs against the sustainable development goals.